The motivation for such changes is to provide a more flexible and secure framework for wallets and layer 2 applications. Chrysalis focused solely on using the ledger as a payment application, while Stardust transforms the ledger into a settlement layer for interconnected layer 2 blockchains and applications.

The unspent transaction output (UTXO) model defines a ledger state where balances are not directly associated to addresses but to the outputs of transactions. In this model, transactions reference outputs of previous transactions as inputs, which are consumed (removed) to create new outputs. A transaction must consume all the funds of the referenced inputs.

Within a transaction using UTXOs, inputs and outputs make up the to-be-signed data of the transaction. The section unlocking the inputs is called the unlock. An unlock may contain a signature proving ownership of a given input's address and/or other unlock criteria. 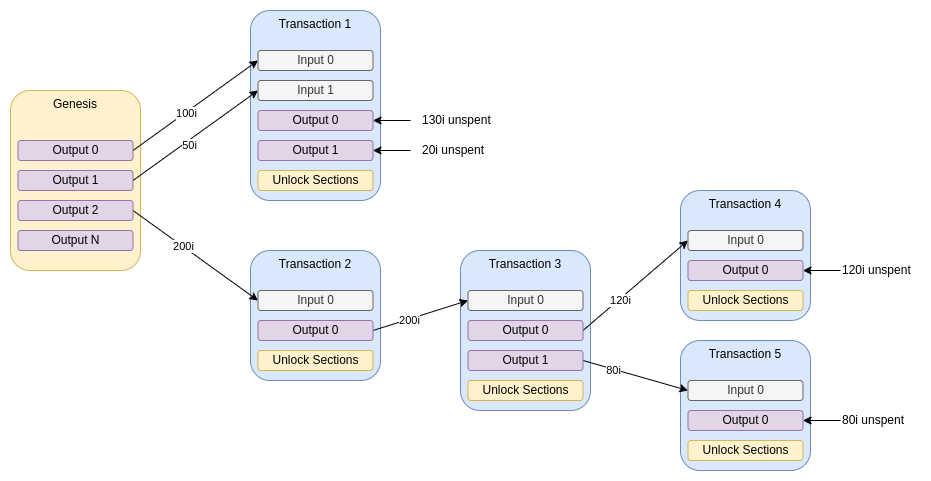 A Transaction Payload is made up of two parts:

The serialized form of the transaction is deterministic, meaning the same logical transaction always results in the same serialized byte sequence. However, in contrast to Chrysalis Phase 2 TIP-7 the inputs and outputs are considered as lists. They can contain duplicates and their serialization order matches the order of the list; they do not need to be sorted.

The Transaction Payload ID is the BLAKE2b-256 hash of the entire serialized payload data including unlocks.

The following table describes the entirety of a Transaction Payload in its serialized form following the notation from TIP-21:

The Network ID field of the transaction essence serves as a replay protection mechanism. It is a unique value denoting whether the transaction was meant for the IOTA mainnet, shimmer, testnet, or a private network. It consists of the first 8 bytes of the BLAKE2b-256 hash of the Network Name protocol parameter, interpreted as an unsigned integer number.

The Inputs field holds the inputs to consume in order to fund the outputs of the Transaction Payload. Currently, there is only one type of input, the UTXO Input. In the future, more types of inputs may be specified as part of protocol upgrades.

Each input must be accompanied by a corresponding Unlock at the same index in the Unlocks part of the Transaction Payload.

A UTXO Input is an input which references an unspent output of a previous transaction. This UTXO is uniquely identified by its Output ID, defined by the Transaction ID of the creating transaction together with corresponding output index. Each UTXO Input must be accompanied by an Unlock that is allowed to unlock the referenced output.

The Inputs Commitment field of the Transaction Essence is a cryptographic commitment to the content of the consumed outputs (inputs). It consists of the BLAKE2b-256 hash of the concatenated output hashes.

In the Inputs field, they are only referenced by Output ID. While the Output ID technically depends on the content of the actual output, a client has no way of validating this without access to the original transaction. For the Inputs Commitment, the client has to be aware of the outputs’ content in order to produce a semantically valid transaction. This protects clients against eclipse attacks that would result in loss of funds.

The Outputs field holds the outputs that are created by the Transaction Payload. There are different output types, but they must all have an Amount field denoting the number of IOTA coins to deposit.

The following table lists all the output types that are currently supported as well as links to the corresponding specification. The SigLockedSingleOutput as well as the SigLockedDustAllowanceOutput introduced in Chrysalis Phase 2 TIP-7 have been removed and are no longer supported.

The Transaction Essence itself can contain another payload as described in general in TIP-24. The semantic validity of the encapsulating Transaction Payload does not have any impact on the payload.

The following table lists all the payload types that can be nested inside a Transaction Essence as well as links to the corresponding specification:

The Unlocks field holds the unlocks unlocking inputs within a Transaction Essence.

The following table lists all the output types that are currently supported as well as links to the corresponding specification. The Signature Unlock and the Reference Unlock are specified as part of this TIP.

The Signature Unlock defines an Unlock which holds a signature signing the BLAKE2b-256 hash of the Transaction Essence (including the optional payload). It is serialized as follows:

The Reference Unlock defines an Unlock which references a previous Unlock (which must not be another Reference Unlock). It must be used if multiple inputs can be unlocked via the same Unlock. It is serialized as follows:

Example: Consider a Transaction Essence containing the UTXO Inputs 0, 1 and 2, where 0 and 2 are both spending outputs belonging to the same Ed25519 address A and 1 is spending from a different address B. This results in the following structure of the Unlocks part:

A Transaction Payload has different validation stages, since some validation steps can only be executed when certain information has (or has not) been received. We therefore distinguish between syntactic and semantic validation.

The different output types and optional output features introduced by TIP-18 add additional constraints to the transaction validation rules, but since these are specific to the given outputs and features, they are discussed for each output type and feature type separately.

The following criteria defines whether a payload passes the syntactical validation:

The Semantic validation of a Transaction Payload is performed when its encapsulating block is confirmed by a milestone. The semantic validity of transactions depends on the order in which they are processed. Thus, it is necessary that all the nodes in the network perform the checks in the same order, no matter the order in which the transactions are received. This is assured by using the White-Flag ordering as described in TIP-2.

The following criteria defines whether a payload passes the semantic validation:

If a Transaction Payload passes the semantic validation, its referenced UTXOs must be marked as spent and its new outputs must be created/booked in the ledger. The Block ID of the block encapsulating the processed payload then also becomes part of the input for the White-Flag Merkle tree hash of the confirming milestone (TIP-4).

Transactions that do not pass semantic validation are ignored. Their UTXOs are not marked as spent and their outputs are not booked in the ledger.

Since transaction timestamps – whether they are signed or not – do not provide any guarantee of correctness, they have been left out of the Transaction Payload. Instead, the global timestamp of the confirming milestone (TIP-8) is used.

While, in contrast to Winternitz one-time signatures (W-OTS), producing multiple Ed25519 signatures for the same private key and address does not decrease its security, it still drastically reduces the privacy of users. It is thus considered best practice that applications and services create a new address per deposit to circumvent these privacy issues.

In essence, Ed25519 support allows for smaller transaction sizes and to safely spend funds which were sent to an already used deposit address. Ed25519 addresses are not meant to be used like email addresses. See this Bitcoin wiki article for further information.