The current dust protection in chrysalis-pt2 is only an intermediate solution to prevent attacks or misbehavior that could bloat the ledger database. The design has several drawbacks, e.g. it does not scale, relies on a total ordering of the tangle and it is rather complicated to use from a user point of view.

This document describes a new dust protection concept, called storage deposit, which solves the mentioned drawbacks and creates a monetary incentive to keep the ledger state small. It focuses on the underlying problem, the increase in database size, instead of artificially limiting the number of UTXOs. This is achieved by enforcing a minimum IOTA coin deposit in every output based on the actually used disc space of the output itself.

In a distributed ledger network, every participant, a so-called node, needs to keep track of the current ledger state. Since chrysalis-pt2, the IOTA ledger state is based on the UTXO model, where every node keeps track of all the currently unspent outputs. Without dust protection, even outputs containing only one single IOTA coin are valid and therefore stored in the database.

Misusage by honest users or intentionally bad behavior by malicious actors can lead to growing database and snapshot sizes and increasing computational costs (database lookups, balance calculations). Due to these increasing hardware requirements, the entry barrier to participate in the network becomes unaffordable and less nodes would operate the network.

Especially in a fee-less system like IOTA, this is a serious issue, since an attacker can create a lot of damage with low effort. Other DLTs do not yet face this problem, as such an attack would be much more expensive due to the high transaction fees. However, in order to solve scalability issues more and more transactions need to be handled. Therefore, other DLT projects will also eventually run into the same dust limitations. This document proposes to introduce storage deposit to address this.

The current dust protection solution in chrysalis-pt2 does not satisfy the mentioned requirements for the following reasons:

Blocks including payloads, even transaction payloads, are considered to be pruned by the nodes, but unspent transaction outputs must be kept until they are spent. Therefore the dust protection is based on the unspent outputs only.

Every output created by a transaction needs to have at least a minimum amount of IOTA coins deposited in the output itself, otherwise the output is syntactically invalid.

Starting with the tokenization and smart contracts mainnet upgrade, new output types are introduced by TIP-18 that contain mandatory and optional fields with variable length. Each of these fields result in different computational and storage costs, which will be considered by the positive weight_i. The size of the field itself is expressed with byte_size_i. offset is used to take the overhead of the specific output itself into account.

The v_byte_cost is a protocol value, which has to be defined based on reasonable calculations and estimates.

In simple words, the more data you write to the global ledger database, the more IOTA you need to deposit in the output. This is not a fee, because the deposited coins can be reclaimed by consuming the output in a new transaction.

The proposed solution has several advantages over the former solution.

First of all, the database size is limited to an absolute maximum size. Since the total supply of IOTA coins stays constant, also the maximum amount of v_bytes that can ever be written to the database remains constant.

Total ordering of the tangle is not necessary because there is no shared global ledger state for transaction validation anymore. The node can determine if the transaction is valid and the dust protection rules are fulfilled, just by looking at the transaction itself. Therefore this solution is also suitable for IOTA 2.0.

By introducing a certain cost for every byte stored in the ledger, it is possible to store arbitrary data in the outputs, as long as enough IOTA coins are deposited in the output itself to keep the information retained. This enables permanent storage of data in a distributed and decentralized way, without the need of a permanode.

Users have an economic incentive to clean up the database. By consuming old unused outputs, users can reclaim their deposited IOTA coins.

How does it affect other parts of the protocol?​

The dust protection only affects "value-transactions". Since blocks containing other payloads are not stored in the ledger state and are subject to pruning, they cannot cause permanent "dust" and do not need to be considered for dust protection. However, all output types like e.g. smart contract requests are affected and must comply with the min_deposit_of_output criteria. Therefore, these requests could get quite expensive for the user, but the same mechanism introduced for Microtransactions on Layer 1 can be utilized for smart contract requests as well.

To limit the maximum database size, the total IOTA supply needs to be divided by the target database size in bytes to get the worst case scenario regarding the byte costs.

However, in this scenario no outputs hold more IOTA coins than required for the dust protection. This does not represent the real distribution of funds over the UTXOs. We could assume that these output amounts follow Zipf's law. Unfortunately, fitting a Zipf distribution to the current ledger state will not match the future distribution of the funds for several reasons:

Another possibility would be to estimate how much percentage of the database will be used for outputs with minimum required deposit (fund sparsitiy percentage) in the future. The remaining IOTA coins can be ignored in that case to simplify the calculation. Since a fund sparsity percentage of less than 20% would already be bad for other upcoming protocol features like the mana calculation, we could take this value for our calculation instead of the worst case.

The different output types mentioned in the Output Types TIP-18 contain several mandatory and optional fields. Every field itself creates individual computational and storage requirements for the node, which is considered by having different weights for every field.

The following table describes different field types in an output:

Protocol parameters presented in this document are design parameters that will change in the future based on simulation results, benchmarking and security assumptions. The reader should not take these values as definitive.

An example of such parameter for example is the weight assigned to different output field types.

The following tables show the different outputs including the possible fields and their specific weight. 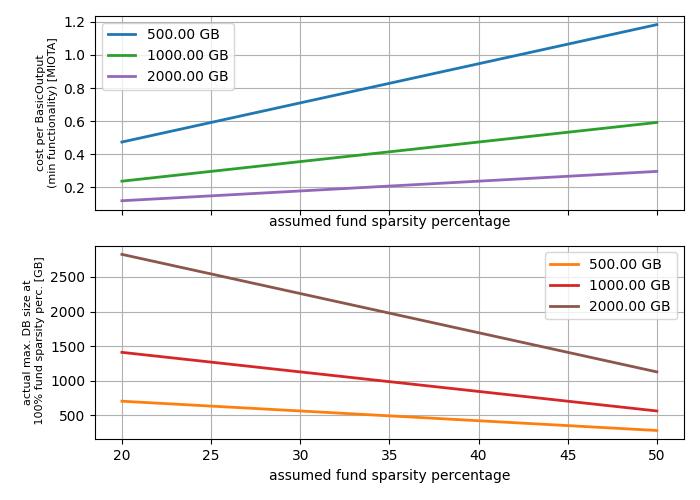 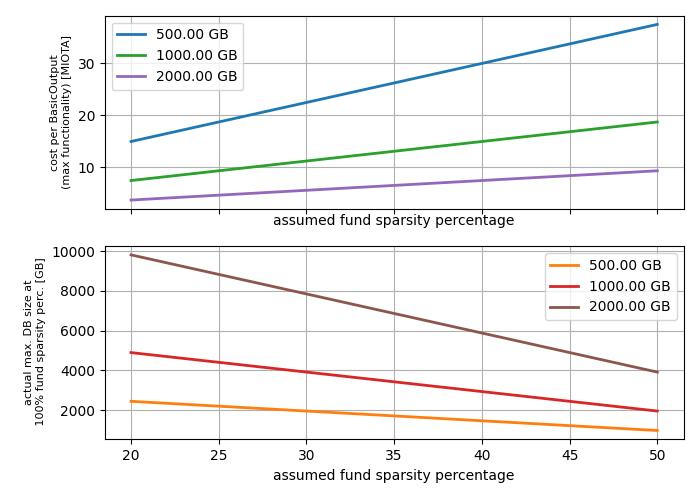 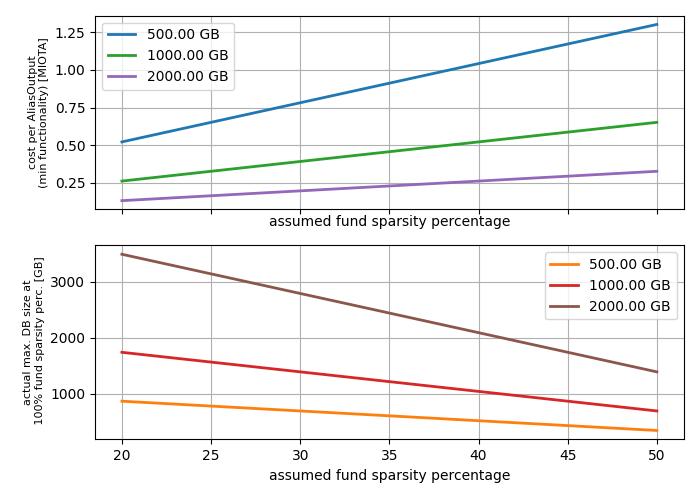 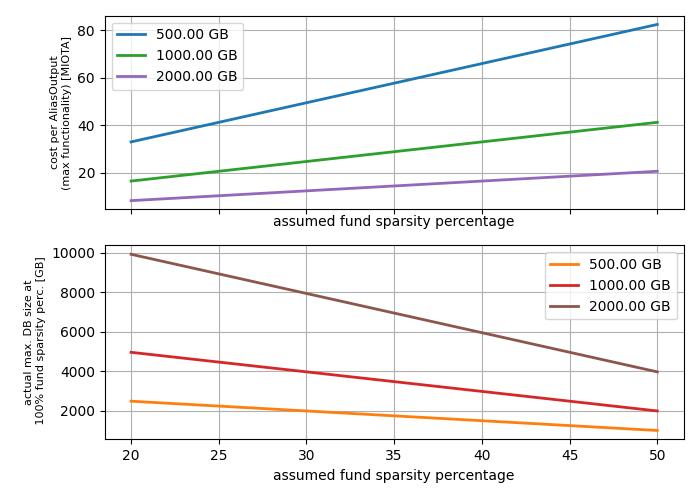 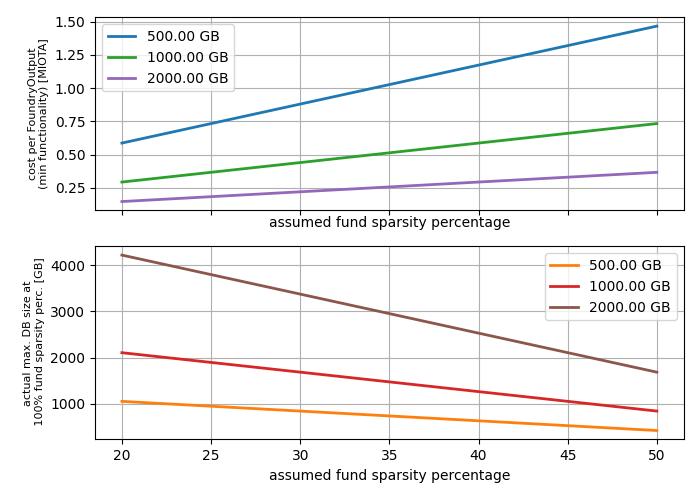 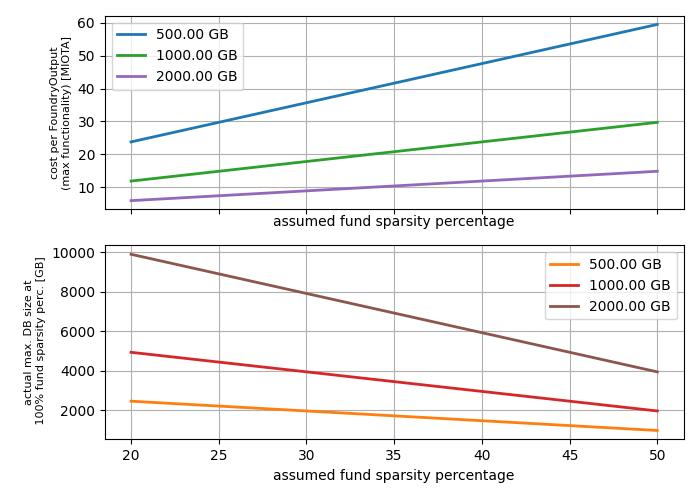 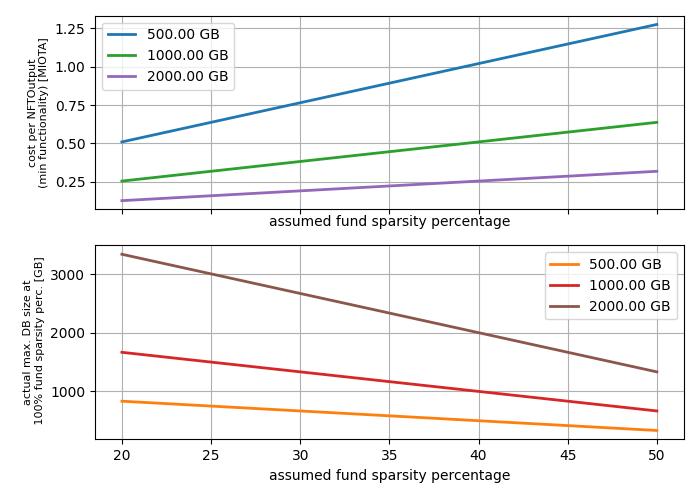 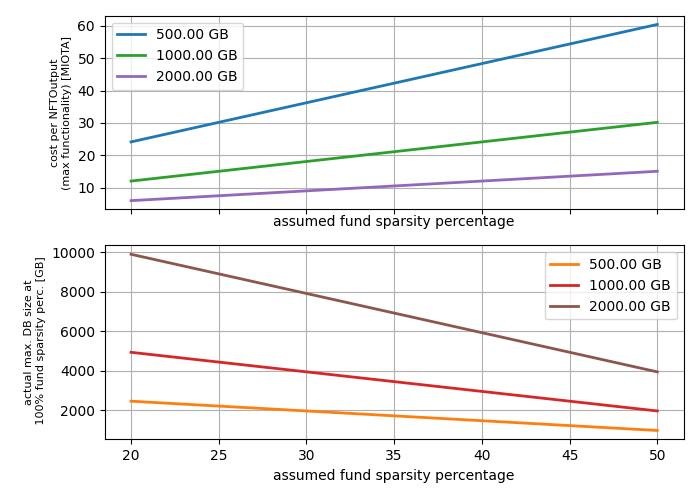 To enable microtransactions on Layer 1 and still satisfy the min_deposit_of_output requirement, a new mechanism called conditional sending is introduced with the new Output Types TIP-18. 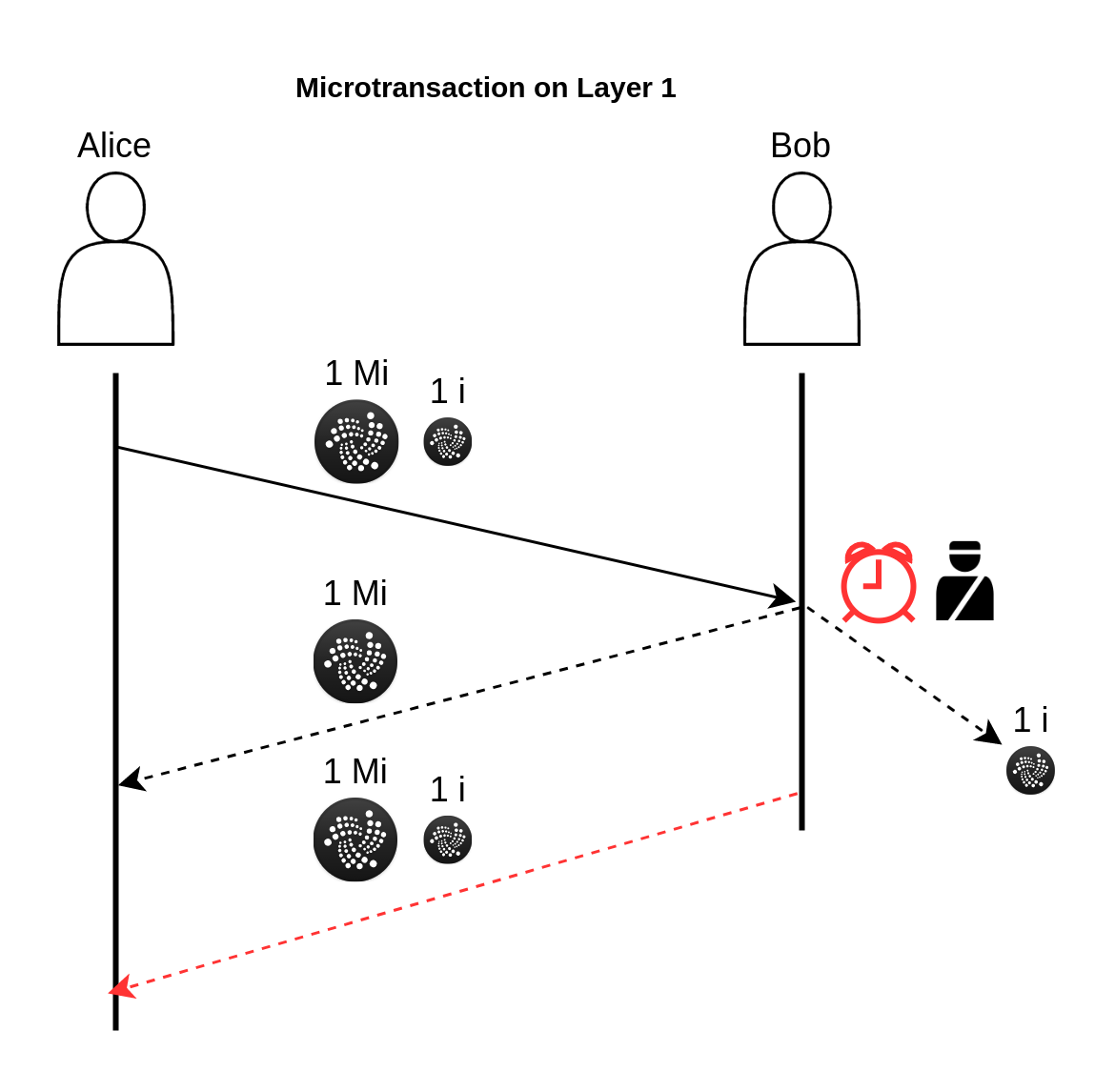 The preceding picture shows the process of the conditional sending mechanism. Alice uses the Basic Output to send a microtransaction of 1 IOTA to Bob's Address. To fulfill the min_deposit_of_output requirement, the Amount is increased by min_deposit_of_output IOTA, which is 1 MIOTA in the above example. To prevent Bob from accessing these additional funds called the storage deposit, Alice adds the optional Storage Deposit Return Unlock Condition to the Basic Output. Now Bob can only consume the newly created output, if the unlocking transaction deposits the specified Return Amount IOTA coins, in this case 1 MIOTA, to the Return Address value defined by Alice. By consuming another UTXO and adding its amount to the received 1 IOTA, Bob takes care to create a valid output according to the dust protection rules.

To prevent Bob from blocking access to the storage deposit forever, Alice specifies the additional Expiration Unlock Condition in the Basic Output. If Bob does not consume the output before the time window defined by Alice expires, Alice regains total control over the output.

This means that there is no risk for Alice to lose the storage deposit, because either Bob needs to return the specified Return Amount, or the ownership of the created output switches back to Alice after the specified time-window has expired.

This mechanism can also be used to transfer native tokens or on-chain requests to ISCP chains without losing control over the required storage deposit.

Another solution is to outsource microtransactions to Layer 2 applications like smart contracts. In Layer 2 there are no restrictions regarding the minimum balance of an output. 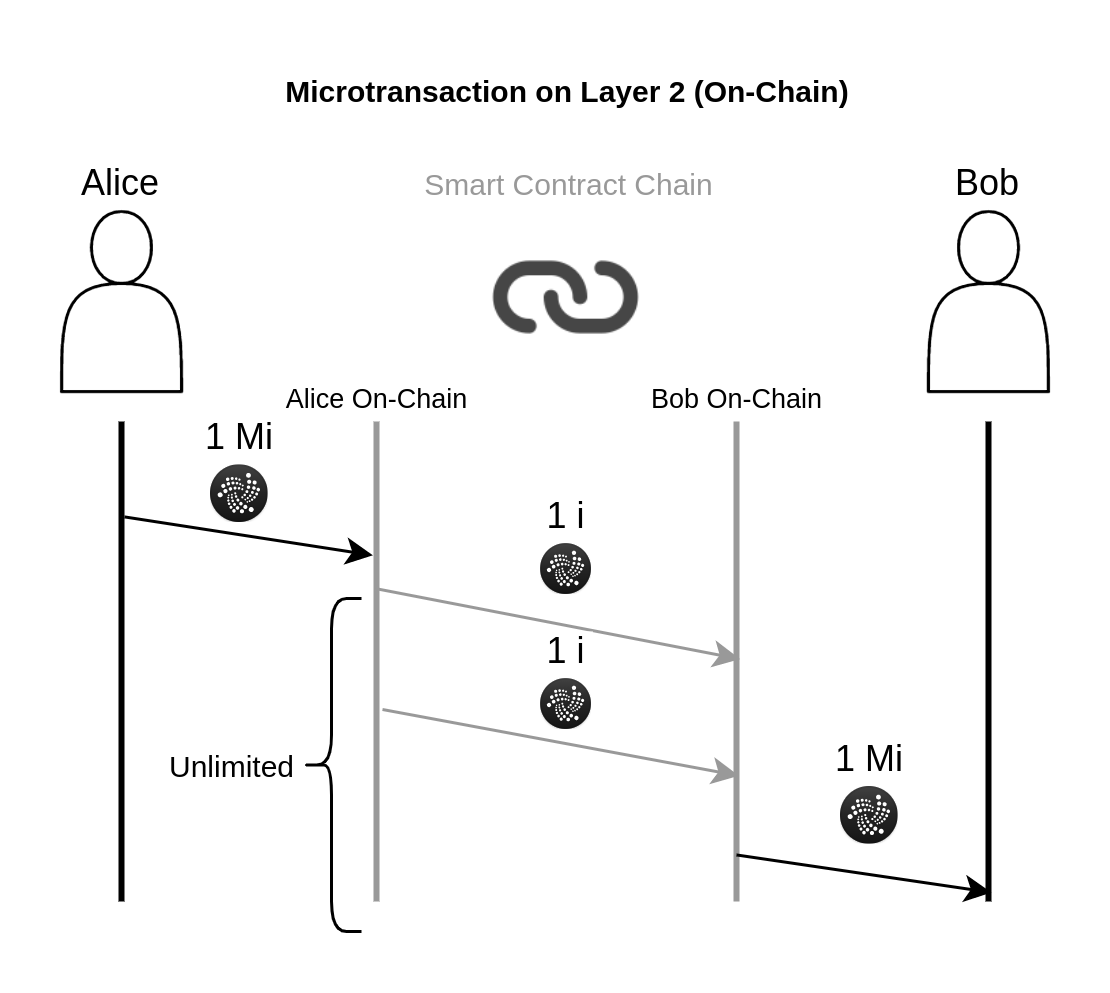 All SigLockedSingleOutput below 1 MIOTA and SigLockedDustAllowanceOutput of an address could be collected and migrated to a single new BasicOutput with the smallest Output ID (byte-wise) of all these collected outputs as the new identifier.

This could probably be done in the form of a global snapshot and would represent a hard-fork.

Another solution is to convert all SigLockedDustAllowanceOutput into BasicOutputs and leave the SigLockedSingleOutput below 1 MIOTA untouched.