An Introduction to IOTA

This topic gives a brief overview and describes some of the main differences between IOTA's Tangle and a blockchain.

Blockchains and the Tangle both fall under the same category of distributed ledger technology (DLT).

The main differences between blockchains and the Tangle are the following:

To explain these points, you need to understand the differences between the data structures and the consensus mechanisms in these DLTs. 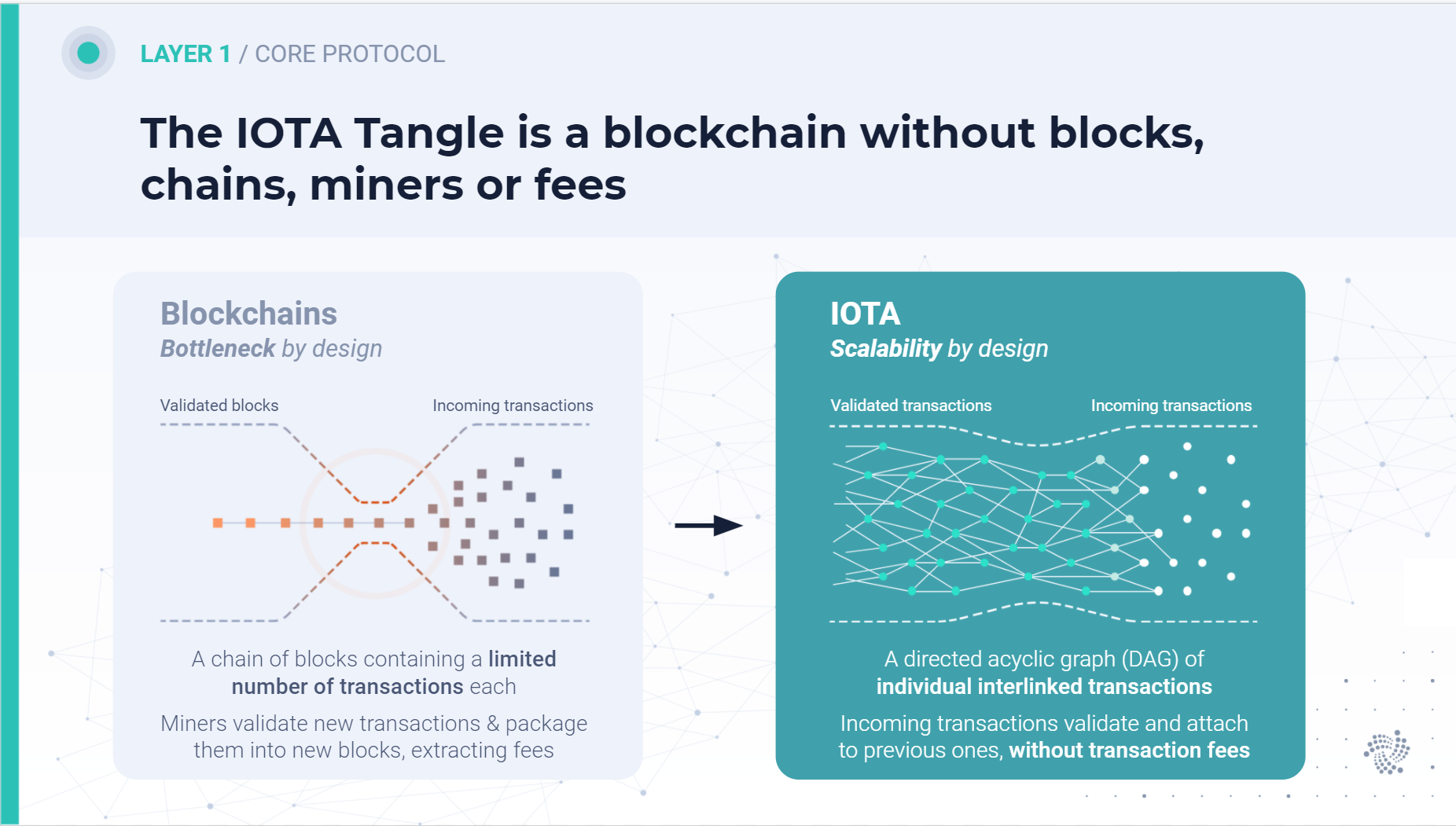 The blockchain data structure consists of a chain of sequential blocks, where each block contains a limited number of messages. As a result, Validators can attach new messages to only one place: a block at the end of the chain. Due to this limitation, blockchain networks often experience slow confirmation times. This limitation is known as the blockchain bottleneck.

All transactions in a blockchain have to wait until they are included in a block. Due to block size and block production time limitations, this creates congestion and waiting times for transactions.

The Tangle data structure is a directed acyclic graph (DAG), where each message is attached to two to eight previous ones. Rather than being limited to a single place for attaching new messages, you can attach messages in different places at the front of the Tangle. The protocol can process these various attachments in parallel.

Consensus in a blockchain​

In blockchains, the network participants are divided into validators (miners, stakers) and users. Miners consume large amounts of computing power to complete the proof-of-work required to chain the blocks together. Miners and stakers are incentivized to validate messages because of the following:

The only way to reverse messages in a PoW blockchain is to mine a new blockchain in the same amount of time it takes other miners to mine a single block. To do so, a miner would need 51% of the network's ability to do PoW, known as hash power. As a result, requiring validators to do PoW secures blockchain networks by making it difficult to attack, change, or stop. The more miners participate, the more secure the network is.

Producing blocks in a proof-of-stake (PoS) Blockchain usually requires a staker to own vast amounts of staked tokens. Often only a few selected or fixed Validators are granted the ability to be block producers. These entities are pre-defined by the protocol's creators (a form of centralization) or emerge as validators holding the most significant stake of tokens. PoS blockchains do not require enormous amounts of energy wasted for PoW, but therefore only allow the wealthiest participants to write to the ledger and produce new blocks.

Consensus in the Tangle​

Sending messages requires no fees in the Tangle because the network has no miners or stakers. In the Tangle, PoW is not used to secure the network. Instead, PoW is used only to discourage spam messages. All IOTA nodes validate messages and use different functions alongside messages in their confirmation to reach consensus. Currently, messages will only be considered valid if they reference a milestone. These milestones are issued by a special network node – the Coordinator.

The Coordinator is a client that sends signed messages called milestones that nodes trust and use to confirm messages. This topic describes how nodes use milestones to determine which messages are confirmed.

Messages in the Tangle are considered for confirmation only when they are directly or indirectly referenced by a milestone that nodes have validated.

To allow the nodes to recognize valid milestones, all nodes that participate in the same IOTA network are configured with the Ed25519 signatures of a coordinator they trust. By knowing those signatures, nodes can validate the signatures in issued milestones to verify whether the trusted Coordinator did sign them.

To ensure that new messages always have a chance of being confirmed, the Coordinator sends indexed milestones signed with those signatures regularly (every 10 seconds). This way ensures that nodes can compare the indexes of their milestones to check whether they are synchronized with the rest of the network.