As a security software, Stronghold prevents attackers from accessing the secrets that it stores. Threat modeling is a systematic approach that tries to assess all the potential attack scenarios on software.

There are multiple steps to this process:

Stronghold is simple in concept; it is used to store secrets. These secrets should never be revealed, even to their owners. Users can interact with secrets through controlled methods called procedures.

Typical use of Stronghold:​

Typical use of Stronghold​ 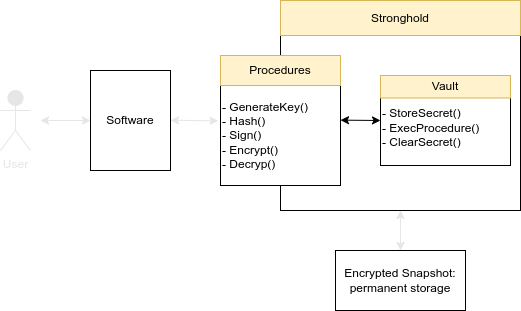 The sole asset of Stronghold is its secrets.

Stronghold defends against multiple types of attackers. Levels also represent how likely it is for an attacker to appear.

A type of attacker that we don't represent here but is also important comes from potential vulnerabilities in the tools used to build the software.

We use the STRIDE threats classification. Stride is applied to all the types of attacks listed above. Mentions of WIP means that it is still "Work In Progress".