State of the Chain​

The state of the chain consists of:

The chain's state is an append-only (immutable) data structure maintained by the distributed consensus of its validators.

Digital Assets on the Chain​

Each native L1 account in the IOTA UTXO ledger is represented by an address and controlled by an entity holding the corresponding private/public key pair. In the UTXO ledger, an account is a collection of UTXOs belonging to the address.

Each ISC L2 chain has a L1 account, called the chain account, holding all tokens entrusted to the chain in a single UTXO, the state output. It is similar to how a bank holds all deposits in its vault. This way, the chain (the entity controlling the state output) becomes a custodian for the assets owned by its clients, similar to how the bank’s client owns the money deposited in the bank.

The consolidated assets held in the chain are the total assets on-chain, which are contained in the state output of the chain.

The data state of the chain consists of a collection of key/value pairs. Each key and each value are arbitrary byte arrays.

In its persistent form, the data state is stored in a key/value database outside the UTXO ledger and maintained by the validator nodes of the chain. The state stored in the database is called the solid state.

The data state has a state hash, a timestamp, and a state index. The state hash is usually a Merkle root, but it can be any hashing function of all data in the data state.

The data state is stored outside the ledger, on the distributed database maintained by validator nodes. Anchoring the state means placing the hash of the data state into the state UTXO and adding it to the L1 UTXO ledger. The UTXO ledger guarantees that there is exactly one such output for each chain on the ledger at every moment. We call this output the state output (or state anchor) and the containing transaction the state transaction (or anchor transaction) of the chain. The state output is controlled (i.e., can be unlocked/consumed) by the entity running the chain.

With the anchoring mechanism, the UTXO ledger provides the following guarantees to the IOTA Smart Contracts chain:

The data state is updated by mutations of its key/value pairs. Each mutation either sets a value for a key or deletes a key (and the associated value). Any update to the data state can be reduced to a partially ordered sequence of mutations.

A block is a collection of mutations to the data state that is applied in a state transition:

The state transition in the chain occurs atomically in a L1 transaction that consumes the previous state UTXO and produces the next one. The transaction includes the movement of the chain's assets and the update of the state hash,

At any moment in time, the data state of the chain is a result of applying the historical sequence of blocks, starting from the empty data state.

On the L1 UTXO ledger, the state's history is represented as a sequence (chain) of UTXOs, each holding the chain’s assets in a particular state and the anchoring hash of the data state. Note that not all the state's transition history may be available: due to practical reasons, older transactions may be pruned in a snapshot process. The only thing guaranteed is that the tip of the chain of UTXOs is always available (which includes the latest data state hash).

The ISC virtual machine (VM) computes the blocks and state outputs that anchor the state, which ensures that the state transitions are calculated deterministically and consistently. 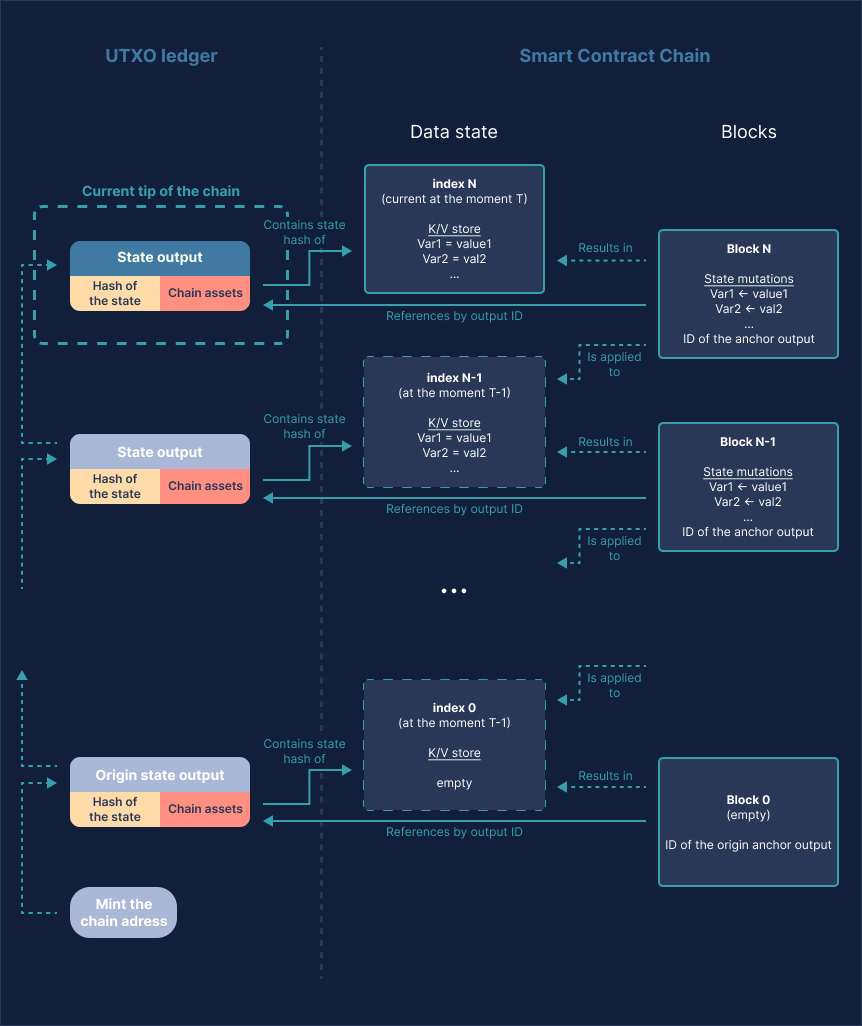