On the L1 Ledger, like with any DLT, we have trustless and atomic transfers of assets between addresses on the ledger.

Tokens controlled by an address can be moved to another address by providing a valid signature using the private key that controls the source address.

In IOTA Smart Contracts, each chain has a L1 address (also known as the Chain ID) which enables it to control L1 assets (base tokens, native tokens and NFTs). The chain acts as a custodian of the L1 assets on behalf of different entities, thus providing a L2 Ledger.

The L2 ledger is a collection of on-chain accounts (sometimes called just accounts). L2 accounts can be owned by different entities, identified by a unique Agent ID. The L2 ledger is a mapping of Agent ID => balances of L2 assets.

Any L1 address can be the owner of a L2 account. The Agent ID of an L1 address is just the address,

Tokens in an address account can only be moved through a request signed by the private key of the L1 address.

Thus, the Agent ID of a smart contract is composed as the contract hname plus the chain ID, with syntax <hname>@<chain-id>. For example: cebf5908@tgl1pzehtgythywhnhnz26s2vtpe2wy4y64pfcwkp9qvzhpwghzxhwkps2tk0nd.

Note that this allows trustless transfers of assets between smart contracts on the same or different chains.

The Agent ID of the common account is <hname=0>@<chain-id>. For example: 00000000@tgl1pzehtgythywhnhnz26s2vtpe2wy4y64pfcwkp9qvzhpwghzxhwkps2tk0nd.

Tokens in an Ethereum account can only be moved by sending an Ethereum transaction signed by the same address.

The accounts core contract is responsible for managing the L2 ledger. By calling this contract, it is possible to:

The following diagram illustrates an example situation. The the IDs and hnames are shortened for simplicity. 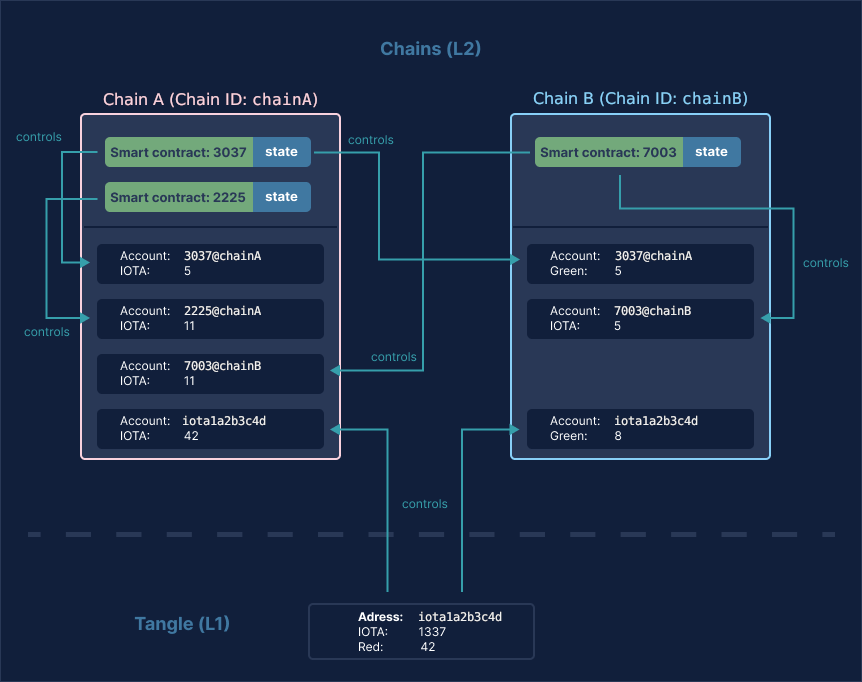 So, the owner of the private key behind the address controls three different accounts: the L1 account and one L2 account on each chain.