Operations that involve traversing the Tangle are very performance intensive and, thus, we need to minimize the amount of traversing to keep algorithms fast. Markers are a tool to infer structural knowledge about the Tangle without actually traversing it.

Markers are not a core module of the Coordicide project.

Markers are a tool to infer knowledge about the structure of the Tangle, therefore, we use them to keep algorithms fast. Specifically, markers are used for:

On a high level, markers provide structural knowledge of the Tangle and each individual block without the need to traverse (aka walking the Tangle). Markers are a form of meta-information (for each block) that each node locally creates when processing blocks. They can be seen as specific, uniquely tainted blocks that, taken together, again build a DAG within the Tangle. We can then utilize this marker DAG to determine structural details. 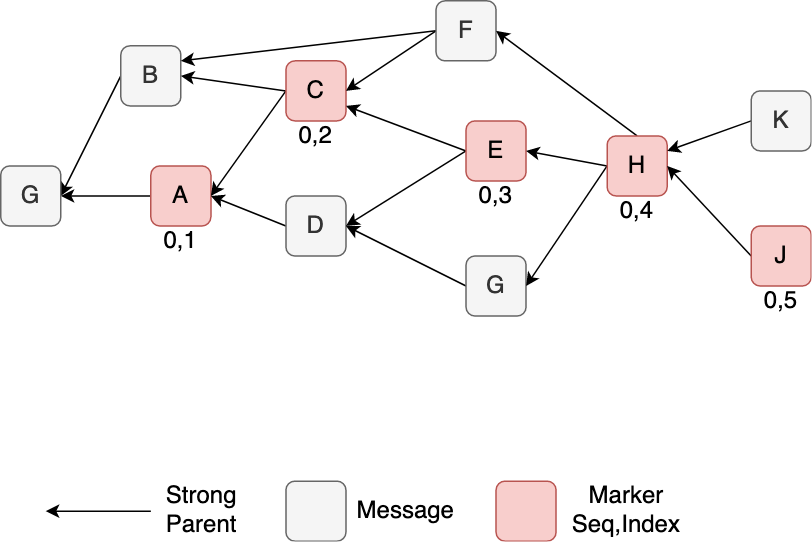 The above example shows a Tangle with the red blocks being markers in the same sequence (more details on sequences later). A marker is uniquely identified by sequenceID,index, where the index is ever-increasing. Any block can be "selected" as a marker if it fulfills a certain set of rules:

For this reason, we keep track of the marker distance, which signals the distance of blocks in the Tangle in a certain past cone where no marker could be assigned. If this distance gets too big, a new sequence is created as is shown in the example below (marker distance to spawn a new sequence = 3).

The example above shows a side chain starting from block L to block P where it merges back with the "main Tangle". There can be no new marker assigned as none of the blocks L-O have the latest marker of sequence 0 in their past cone. The marker distance grows and eventually a marker is created at block N. Following, a marker can be assigned to block O and block P. The latter is special because it combines two sequences. This is to be expected as disparate parts of the Tangle should be merged eventually. In case a block has markers from multiple sequences in its past cones the following rules apply:

With these rules in mind, it becomes clear why block P has the marker 1,6 and block R has marker 1,7. In case of block Q, no marker can be assigned to sequence 1, and, thus, a new marker in sequence 0 is created.

Always continuing the highest seqeuence should result in smaller sequences being discontinued once disparate parts of the Tangle merge and overall a relatively small number of sequences (optimally just one) is expected to be active at any given moment in time.

The information that markers yield about past and future cone is only valid for any given sequence individually. However, to relate markers of separate sequences, we need to track dependencies between sequences. Therefore, sequences build a graph between each other, where relationships between the sequences can be seen.

Each sequence keeps track of referenced sequences and referencing sequences at a specific marker index so that bidirectional traversing into the future and past are possible from a sequence is possible.

Specifically, in our example there are 3 bidirectional references between sequence 0 and sequence 1. Sequence 0:

Conflicts are introduced to the Tangle when double spends occur and are carried forward (inherited) by blocks until a conflict is resolved (merge to master). As such, each block needs to carry conflict information and if a conflict arises deep within the Tangle, each block would need to be traversed individually, which makes this operation very expensive and thus attackable.