One of the IOTA Foundation’s primary roles is defining and delivering on a development roadmap that aligns with the Foundation's strategy to reach production-readiness and adoption.

The IOTA mainnet has been operational since 2016 and the overall engineering strategy evolved significantly based on industry demand and feedback.

Progress in Coordicide research has resulted in identifying many concepts that could already be implemented on the current IOTA mainnet and provides significant value to users of the protocol before Coordicide. This led to the formalization of our engineering strategy around Chrysalis: a series of upgrades to the protocol that achieves production-readiness before Coordicide.

The benefit of this approach is that many of the protocol properties will remain the same, or almost the same, for Coordicide. That, together with a better set of developer tools, will make the transition to Coordicide much simpler.

The intended outcomes for Chrysalis were:

The Stages to Chrysalis​ 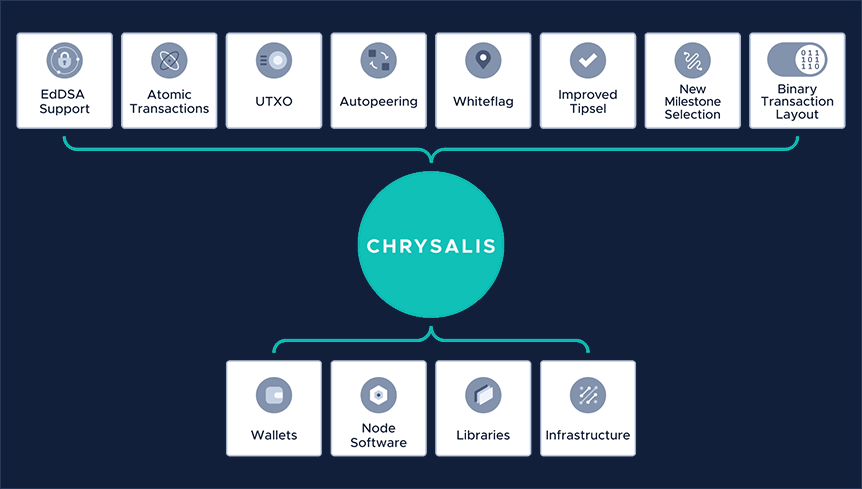 The Chrysalis upgrade was a complex undertaking. We coordinated a number of distinct products to ensure a smooth transition for IOTA’s you and the partners. In addition to the core node software, we also needed to update our wallet software, our libraries, and the entire infrastructure.

Another important requirement was the ease of transition to the future Coordicide network. By carefully planning the breaking changes introduced along the way, and providing support in our developer tools, we ensured that our growing ecosystem of developers, startups, and corporations could reliably develop and launch new innovative products on IOTA.

The plan for implementing Chrysalis was divided into two phases:

The first phase consisted of improved tip selection (URTS), milestone selection, and White flag. These were gradually implemented in the node software. This phase required an upgrade of all nodes, including the coordinator node, and did not require a snapshot.

The first phase of Chrysalis resulted in:

The second phase of Chrysalis consisted of adopting and/or implementing UTXO, atomic transactions, reusable addresses (Ed25519), a transition to a binary transaction layout, and a new set of client libraries and developer tools. These represented significant changes to the core protocol and the way transactions were structured. Once everything was tested, validated, and audited, the Foundation deployed a new Chrysalis network. The upgrade consisted of an extended period when the legacy network remained operational which allowed users, exchanges, and partners to migrate to the Chrysalis network at will.

The second phase of Chrysalis consisted of:

The introduction of reusable addresses was an important change for token holders. This vastly improved IOTA’s usability and made integration into new exchanges, wallets, and payment systems much simpler. A new wallet, called Firefly, was released with Chrysalis which allowed token holders to transition from the WOTS address scheme to the new EdDSA scheme.

From Plan to Action​

With Chrysalis, we had to make decisions on how to best implement all the upcoming changes, ensuring a correct and timely implementation. What follows is an overview of the various components we worked on to successfully implement this update.

Specifications are a major part of our new development process. All our new software projects (Node software, Wallet, Identity, Access, Streams, etc.) were based on vetted specifications. Specifications make it possible for external parties to follow a project’s intended functionality, for example for audit purposes, or develop their own implementations in different languages.

The Chrysalis changes were specified in the form of RFCs. You can find all the RFCs in the protocol-rfcs repository. The list of Chrysalis RFCs includes:

The Trinity wallet was a popular IOTA wallet. With Chrysalis, we released a new wallet implementation, Firefly. The team worked on a complete reevaluation of the wallet architecture, with a completely redesigned experience for you. At its core is a new wallet library written in Rust. The wallet library is designed to allow other developers to easily implement IOTA wallets within their applications. Another new Rust library utilized by Firefly is Stronghold; Stronghold enables ultra-secure secret handling and storage.

Currently, the IOTA Foundation supports two public Networks: Mainnet and Devnet (Devnet is for PoCs and application tests). Both networks provide public endpoints for users and partners. You can discover the networks on our Explorer https://explorer.iota.org.

Nodes deployed to the devnet can be queried using a load balancer at:

We recommend using the load balancer for most scenarios.

Single node endpoints that expose native MQTT in case you need this are:

Chrysalis was the most promising series of upgrades made to IOTA yet. It was a major step for our production-readiness, with increased transaction throughput, network stability, improved usability, and enabled new features and use cases. The upcoming weeks and months are some of the most exciting in IOTA’s history. With the release of Chrysalis, we are on a clear path towards IOTA’s adoption as an enabling technology for IoT and beyond.