Deploy Your Own Tangle

In this tutorial, you will learn how to use a set of Docker-based tools and pre-configured setups to deploy your own (hornet-based) Chrysalis Tangle in "one-click" to cloud environments or platforms.

IOTA mainnet and devnet are public IOTA Networks where you can develop your own applications. Due to scalability or data locality reasons, sometimes it is necessary to run your own local IOTA Tangle (aka Private Tangle). In the future, the (child) Tangle may also be anchored to the IOTA mainnet, through Data Sharding (a feature currently under research and development by the IOTA Foundation). To automate and simplify the deployment of a Chrysalis Tangle, some tools, publicly available in the one-click-tangle repository, have been developed. We have also integrated them for use in the AWS Marketplace and, in the future, on other Cloud marketplaces. 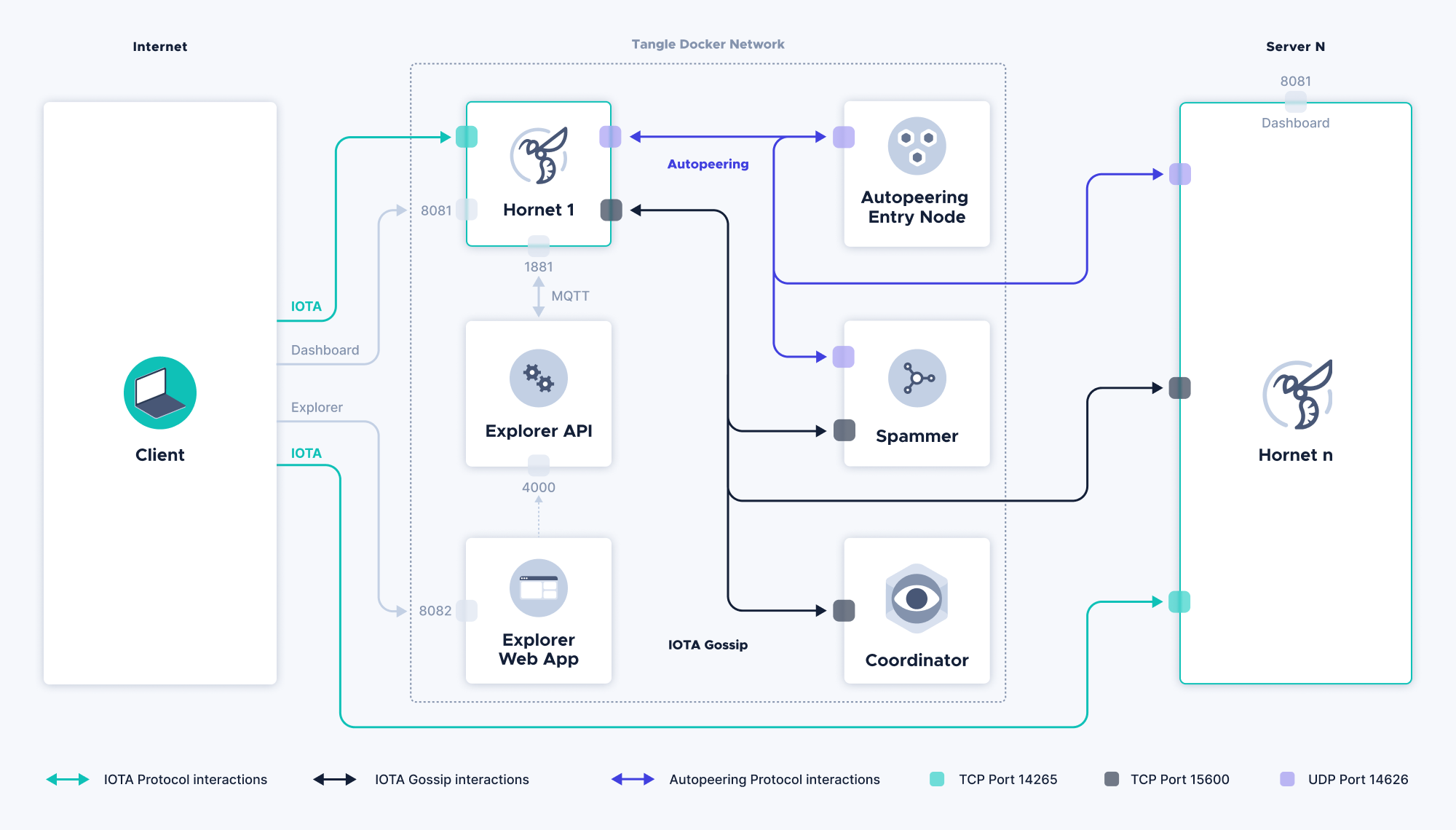 In addition, to make your Tangle easier to use, a Tangle Explorer can be deployed, conveniently, similar to the one at https://explorer.iota.org. As a result, all the participants in the network are able to browse and visualize messages or IOTA Streams channels. The Tangle Explorer deployment involves two containers, one with the REST API listening at port 4000 and one with the Web Application exposed to the host at port 8082. The Tangle Explorer also uses MQTT to watch what is happening on your Tangle. This is the rationale for having a connection between the Explorer's REST API Container and the Hornet Node through port 1881.

The summary of containers that will be running and the exposed (actually in use) Docker ports are below:

The deployment architecture described above can be easily transitioned to production-ready by incorporating a reverse proxy leveraging NGINX. As a result, the amount of ports exposed to the outside world can be reduced or load balancing between the nodes of your Tangle can be achieved. IOTA intends to provide automatic, "one-click" deployment of this kind of enhanced architectures in a future version of this software.

But now let us see how we can launch our Tangle via a "single-click". We have two options: through the AWS Marketplace or through any Docker-enabled machine.

To materialize on AWS using the deployment architecture described above, go to the AWS Marketplace and install this product and follow the instructions. That's it!

Behind the scenes, the process will launch all the Docker containers (through docker-compose), create a key pair for the Coordinator, configure the Coordinator public key for the initial node, generate an initial IOTA Address holding all IOTAs, the identity for our Nodes, etc., meaning our deployment architecture and all the steps described here, but fully automated, with "one-click"!.

Below are the parameters of this "one-click" installation (further details can be found at here):

Further instructions for AWS deployments can be found one our github page. If you want to know lower-level details of the AWS installation, how to do it yourself in any Docker-enabled VM, and what happens under the scenes, please continue reading.

To start your Tangle through the command line:

Behind the scenes, our process will create the identity for the Coordinator, the keys that will be used for signing milestones, an initial IOTA Address holding all IOTAs, the identity of our Nodes, etc meaning all the steps described here, but fully automated.

After the process finishes, you should see the following docker containers up and running:

The total amount of tokens allocated to the treasury should not be equal to the total supply of tokens which is 2779530283277761. Otherwise, the mint address will have zero tokens.

For convenience, a script is also available to add new Nodes to an already running Tangle.

The main parameter is a Node connection string. This string has different fields separated by a colon (:). The first field is the (container and host) name of your Node and, at installation time, it can be followed, optionally, by the TCP port numbers corresponding to the API endpoint, the peering endpoint, and the dashboard endpoint.

If no port numbers are provided, meaning only the container name is supplied, no ports will be exposed to the host. In addition, you can omit some of the ports, but the separator : has to be kept, for instance, if you only want to expose the dashboard port to the host you can run:

In case you want to spin a node from a different machine (or base folder), you would need to manually pass those parameters, including a multiaddr peer address of a node to peer with (for instance node1) you want to peer with, as explained here.

There could be limitations in the number of peers triggered by the maximum number of unknown peers parameter. To overcome it, you may need to change this configuration property.