How to Run Hornet On Kubernetes

This page explains how to run IOTA mainnet Hornet nodes in a Kubernetes (K8s) environment. Kubernetes is a portable, extensible, open-source platform for managing containerized workloads and services that facilitates both declarative configuration and automation. It has a large, rapidly growing ecosystem. K8s services, support, and tools are widely available on multiple cloud providers.

If you are not familiar with K8s we recommend you to start by learning the K8s technology.

Running Hornet mainnet nodes on K8s can enjoy all the advantages of a declarative, managed, portable and automated container-based environment. However, as Hornet is a stateful service with several persistence, configuration and peering requirements, the task can be challenging. To overcome it, the IOTA Foundation under the one-click-tangle repository umbrella is providing K8s recipes and associated scripts that intend to educate developers on how nodes can be automatically deployed, peered and load balanced in a portable way.

This script allows you to run sets of Hornet instances "in one click" in your K8s' environment of choice and also provides a blueprint with the best practices K8s administrators can leverage when deploying production-ready environments.

For running the one click script you need to get access to a K8s cluster. For local development, we recommend microk8s. Instructions on how to install it can be found here. You may also need to enable the ingress add-on on micro-k8s by running microk8s.enable ingress. You will also need to properly configure the kubectl command-line tool to get access to your cluster.

You can pass the following parameters as variables on the command line to the one-click script:

You can deploy a Hornet Node using the default parameter values by running the following command:

After executing the script, different Kubernetes objects will be created under the tangle namespace, as enumerated and depicted below. You can see the kubectl instruction to get more details about them. 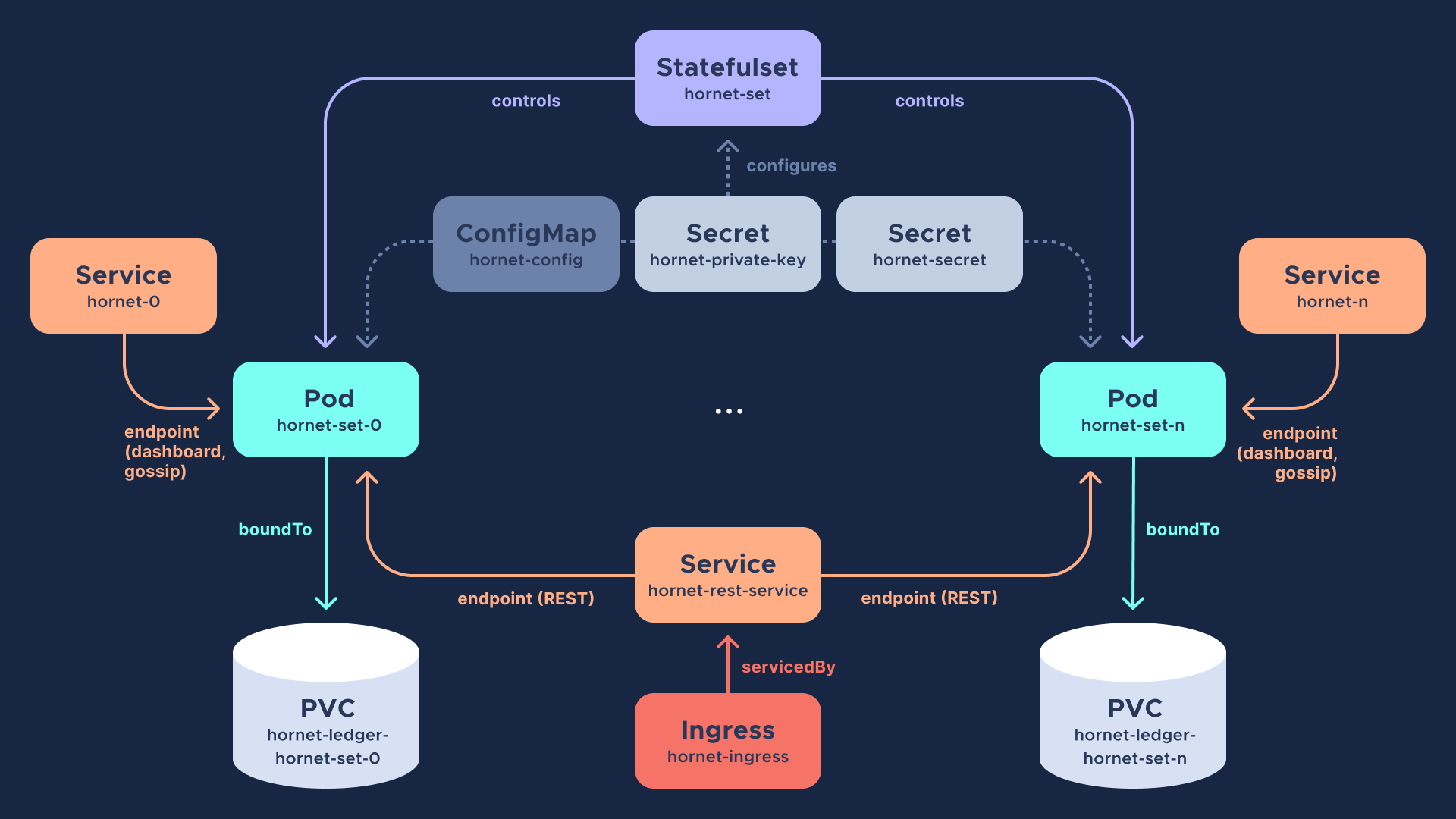 You may have noticed that the pod's name is the concatenation of the name of the Statefulset hornet-set plus an index indicating the pod number in the set (in this case 0). If you scaled your StatefulSet to 2, you would have two pods (hornet-set-0 and hornet-set-1).

The name of the Persistent Volume Claim is the concatenation of hornet-ledger plus the name of the bound Pod, hornet-set-0 in our case.

You can run kubectl describe services -n tangle to get more details about the endpoints supporting the referred Services.

In the example above, you can observe that the public IP address of the load balancer associated with the Ingress Controller is shown. This will happen when you deploy on a commercial, public cloud service.

Likewise, you can run kubectl describe configmap hornet-config to obtain more details about the ConfigMap.

This blueprint does not provide Network Policies. However, in a production environment, they should be defined so that Pods are properly restricted to perform outbound connections or receive inbound connections.

Once you have deployed your Hornet Node on the cluster, you will want to access it from the outside. Fortunately, that is easy as you have already created K8s Services of type Node Port. This means that your Hornet Node will be accessible through certain ports published on the K8s machine (worker node in K8s terminology) where Hornet is actually running.

In the example above, the REST API endpoint of your Hornet Node will be accessible through the port 31480 of a K8s worker. Likewise, the Hornet dashboard will be exposed on the port 30744.

You should receive an output similar to the endpoint of the K8s API Server.

Additionally, you can get access to your Hornet Node REST API endpoint through the external load balancer defined by the Ingress Controller. If you are using a local configuration, this will not make much difference as the machine where the Ingress Controller lives is the same as the Service machine (more details at https://kubernetes.github.io/ingress-nginx). However, in the case of a real environment provided by a public cloud provider, your Ingress controller will usually be mapped to a load balancer exposed through a public IP address. You can find more information in the commercial public cloud environment's specifics section.

If you want to work with multiple instances, you can scale your current K8s StatefulSet by running:

If the cluster has enough resources, a new Hornet Node will automatically be spawned and peered with your original one.

You will notice that one more Pod (hornet-set-1) will be running:

However, if your cluster does not have enough resources, the new POD will still be listed but its status will be Pending:

You can find more details on the reasons why the new Pod is not running by executing:

If your Pod is running properly, a new Persistent Volume will be listed as well:

And an additional Service hornet-1:

The REST service will be load balancing two Pods. You can verify this by running the following command:

If your hornet-0 node is synced, hornet-1 should also be synced as hornet-0 and hornet-1 will have peered. You can verify this by connecting to the corresponding dashboards.

In this section, you can find the internals of our blueprints for deploying Hornet Nodes on K8s. The figure below depicts the target deployment architecture behind our proposed blueprint. 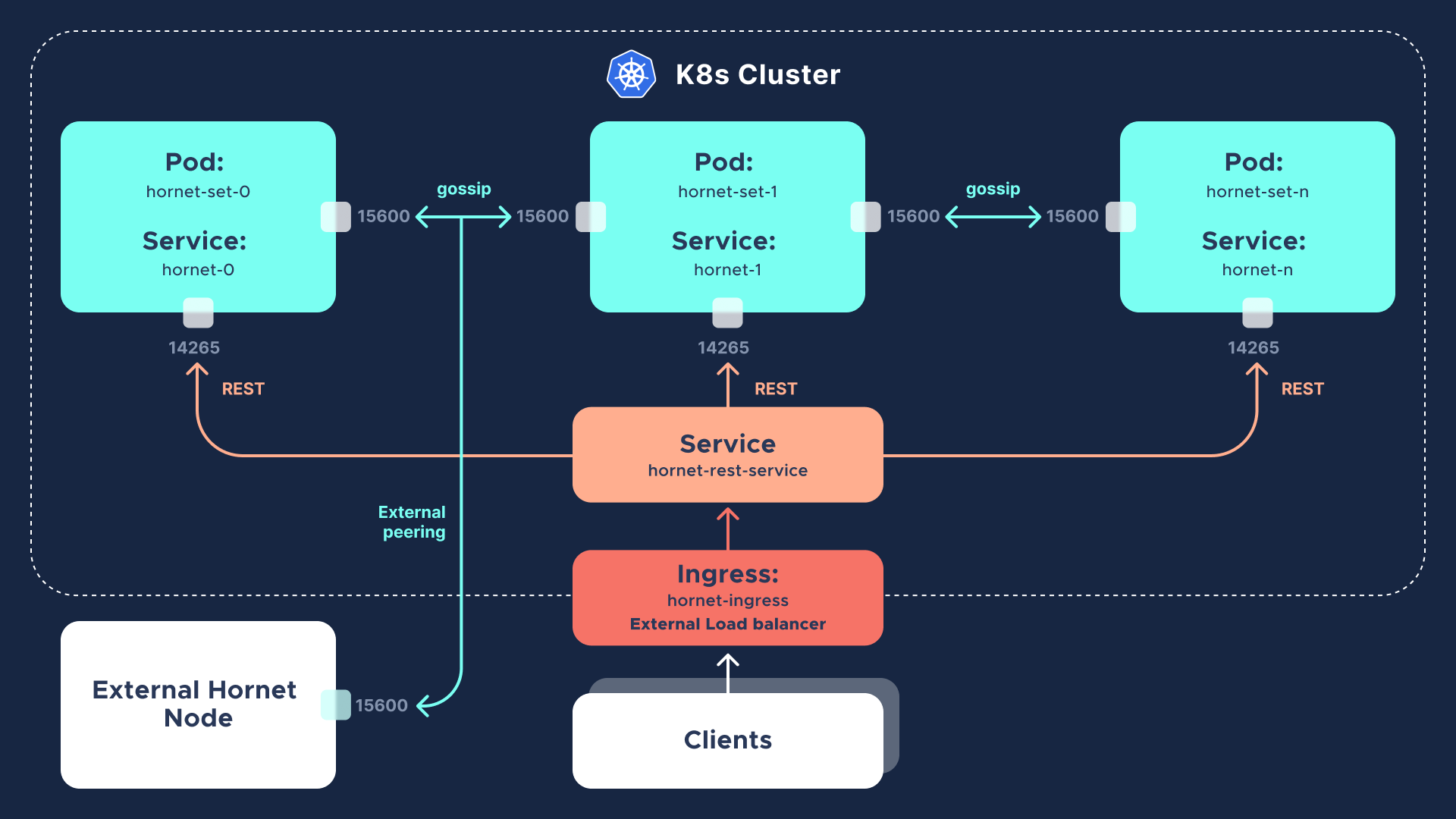 The figure shows the K8s objects used and their relationships. The following sections will provide more details about them, and the K8s manifests that declare them (available at the repository). The label source=one-click-tangle is used to mark these K8s objects that will live under a specific Namespace (named tangle by default).

The template contains the Pod definition, which declares different volumes:

The Pod template configuration also declares extra configuration details such as liveness and readiness probes, security contexts, and links to other resources such as the Secret that defines the dashboard credentials, mapped into environment variables.

Two different kinds of Services are used in our blueprint:

The Ingress Controller hornet-ingress is configured so that the hornet-rest Service can be externally load-balanced. There are two path mappings, /api, whose backend is the hornet-rest Service, and / whose backend is the dashboard of the hornet-0 Service. The latter exists for convenience reasons of this blueprint. In the default configuration, the kubernetes.io/ingress.class is nginx, but you can override that for specific cloud environments (see below).

For ConfigMaps and Secrets, there are no YAML definition files as they are created on the fly through the kubectl command line. They are created from a config directory automatically generated by the "one-click" script. You can see the contents of those objects by running the following command:

The same goes for the Hornet dashboard credentials (all the nodes share the same admin credentials).

As well as for the Nodes' private keys:

The deployment recipes are fully portable to the GKE public cloud environment. You will only need to ensure that the Ingress Controller is correctly annotated with kubernetes.io/ingress.class: gce. You can do this by executing the following command:

Alternatively, if you are using the "one-click" script you can simply execute the following command and the one-click script will perform the annotation during the deployment process.:

The process of deploying an external load balancer by a public cloud provider can take a while.

If you want to get access to the Service Node Ports, you will need to have a cluster with public K8s workers. You can determine the public IP addresses of your K8s workers by running:

Then, you can determine on which K8s worker your Hornet Pod is running by executing the following command (the default NAMESPACE is tangle):

Once you determine the worker and its IP address, you can access each Hornet Node by knowing the Node ports declared by the corresponding service. You can do this by running the following command:

Once you know the port, you will have to create firewall rules so that the port is reachable. That can be done using the gcloud tool. For instance, if your Hornet Node's dashboard is mapped to port 34200 and the public IP address of our K8s worker is 1.1.1.1:

You may also have to look into encrypting Secrets when moving to a production-ready system.

The deployment recipes are fully portable to the EKS commercial public cloud environment. However, there are certain preparation steps (including IAM permission grants) that have to be executed on your cluster so that the Ingress Controller is properly mapped to an AWS Application Load Balancer (ALB). Additionally, as it happens with the GKE environment, you can access your Hornet Nodes through its Service Node Port. The procedure requires a cluster with public workers and security groups configured so that traffic is enabled to the corresponding Service Node Ports.

You will need to follow several preparation steps on your cluster to map the Ingress Controller objects to AWS Application Load Balancers. Please read these documents and follow the corresponding instructions on your cluster:

You will also need to annotate your Ingress Controller with the following:

Remember that you can annotate your Ingress Controller by running kubectl annotate.

If you have made all the preparations and annotations properly, you will be able to find the DNS name of your external load balancer when you execute the following command (Please note it can take a while for DNS servers to sync up):

Reference recipes are key in facilitating the deployment of IOTA mainnet Hornet nodes. The IOTA Foundation provides them as a blueprint that can be customized by developers and administrators in their journey towards production-ready deployment. The reference recipes have been designed with portability and simplicity in mind and tested successfully on some popular commercial public cloud environments.