In this tutorial, you will use the WASM binding of the IOTA Identity framework to digitally prove the existence and validity of a university degree. To follow along please clone this repository.

The src/ directory contains scripts that can be run separately by providing command line arguments. Make sure that the npm dependencies - which include the wasm bindings for the IOTA Identity Framework - are installed by running:

Alice recently graduated from the University of Oslo with a Bachelor of Computer Science. Now, she wants to apply for a remote job at the IOTA Foundation and needs to digitally prove the existence and validity of her degree. What she needs is an immutable and verifiable credential, approved by both the University of Oslo and herself, before presenting it to her potential employer.

As described in the Digital Identities Solution, IOTA Identity builds on the W3C's proposed standards for a digital identity framework based on three roles: 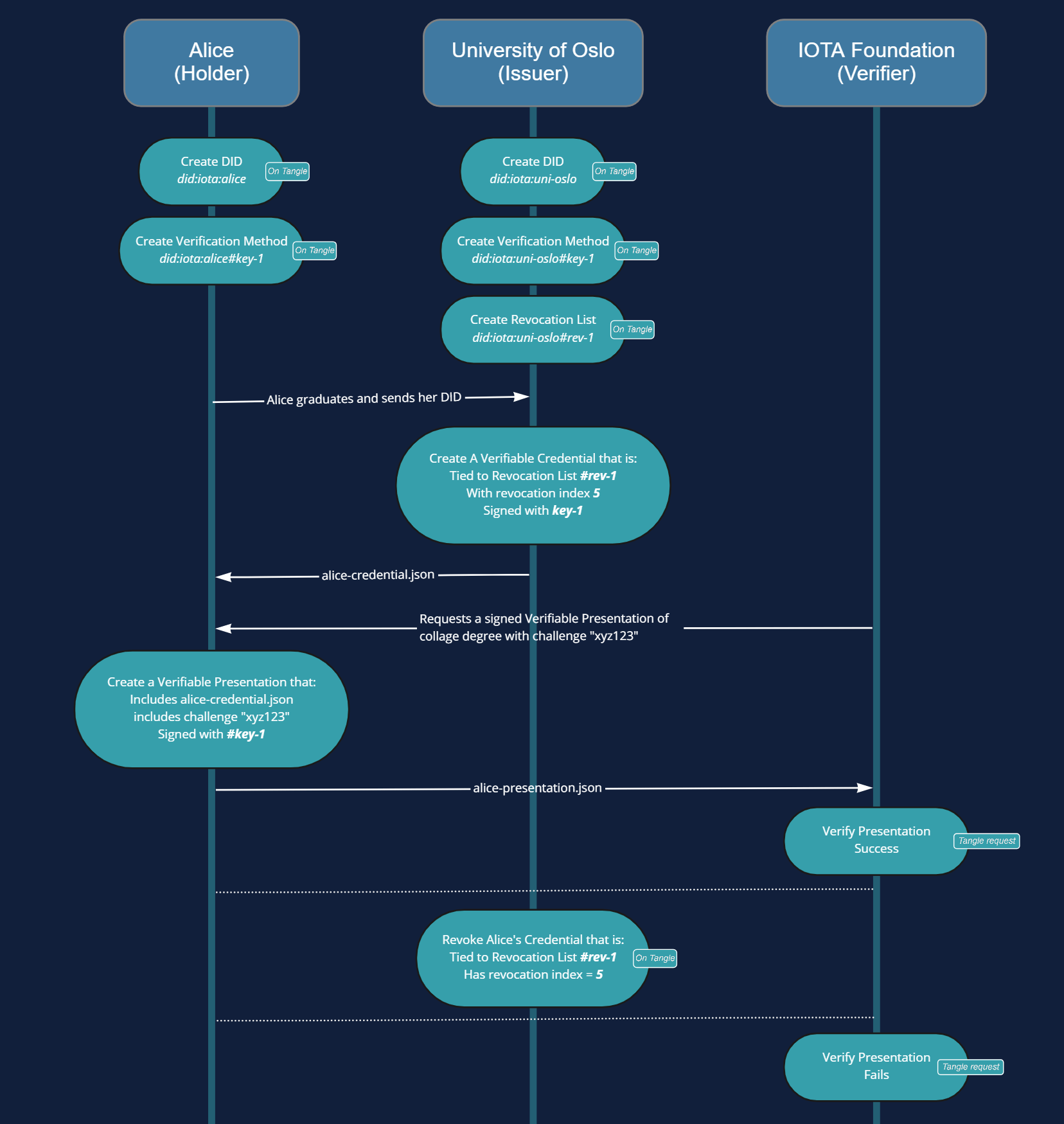 In this tutorial, Stronghold will be used to securely store private keys. The Identity Framework already has Stronghold bindings for Node.js. We will be using them in this tutorial. For simplicity, each stronghold file will be responsible for storing only one DID.

In this process, you will complete the different steps from the perspective of one of the mentioned roles above:

The first thing you will need to do in this tutorial is to create a DID (Decentralized Identifier) Document for Alice. The script createDid.ts can be used to create DIDs using the command:

For Alice, a DID can be created using:

This will create a minimal DID document for alice, and publish it to the Tangle. A Stronghold file alice.hodl will be created under /stronghold-files which contains the Account's state and the private key of the main verification method of the DID. alice-password will be used as a password for the stronghold storage. Obviously this password must be more secure in production applications.

Once you have created Alice's DID, you should do the same for the University of Oslo.

To add a Verification Method the following command can be used:

This command will invoke verificationMethods.ts.

Similar to the issuer, the following command can be run to add a verification method to Alice's DID Document.

In order for the issuer to be able to revoke credentials in the future, a revocation list is needed. See Verifiable Credential Revocation for further details. The following command can be used to create a revocation list:

For the University of Oslo use:

Notice that rev-1 is used to identity this revocation list inside the DID document.

To create a verifiable credential for Alice, run the following command:

After Alice received the verifiable credential from the university, she applies for a job at the IOTA Foundation. The foundation requests a verifiable presentation to be signed by alice that includes the challenge 'xyz123'. The script verifiablePresentation.ts can be run with the command:

This will create a verifiable presentation of Alice's credential that includes the challenge and signed by Alice's key-1 verification method. The resulted presentation is saved in presentations/alice-presentation.json.

Now alice sends the signed verifiable presentation to the IOTA Foundation. The foundation now has to verify if everything is correct and the credential is valid.

The script checkVerifiablePresentation can be run with the command:

So the foundation can run:

Since everything was signed correctly, the verification should succeed.

revocation.ts can be run with the command:

To revoke Alice's Credential you can run:

This will update the revocation list inside the issuer's DID Document and publish it to the tangle. Now if the IOTA Foundation tries to verify the credential again e.g. by running npm run start verify-vp alice-presentation.json xyz123, This will throw an error since the verification now fails.