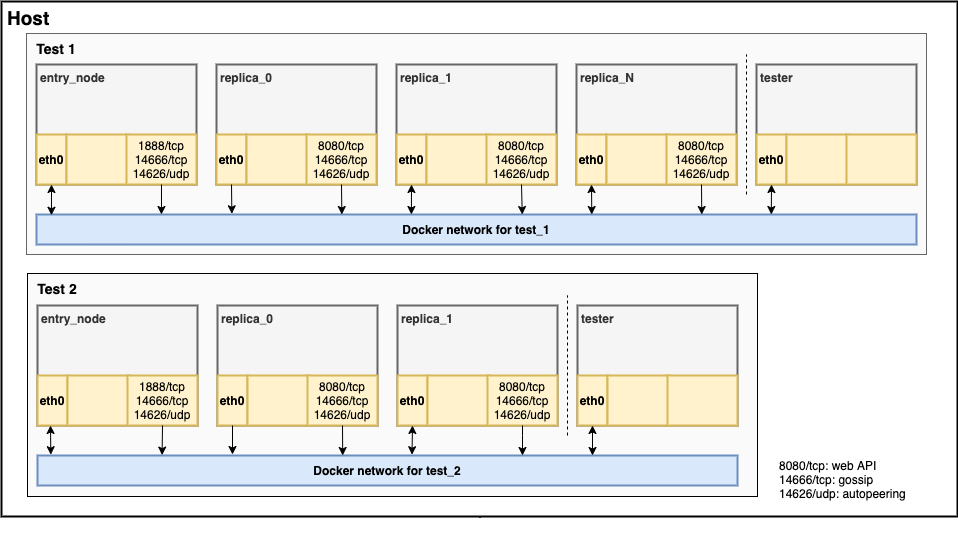 Running the integration tests spins up a tester container within which every test can specify its own GoShimmer network with Docker as schematically shown in the figure above.

Peers can communicate freely within their Docker network and this is exactly how the tests are run using the tester container. Test can be written in regular Go style while the framework provides convenience functions to create a new network, access a specific peer's web API or logs.

To run only selected tests provide their names as a parameter.

The tests produce *.log files for every networks' peer in the logs folder after every run.

On GitHub logs of every peer are stored as artifacts and can be downloaded for closer inspection once the job finishes.

Tests can be written in regular Go style. Each tested component should reside in its own test file in tools/integration-tests/tester/tests. main_test with its TestMain function is executed before any test in the package and initializes the integration test framework.

Each test has to specify its network where the tests are run. This can be done via the framework at the beginning of a test.

When creating a test's network, you can specify a set of Snapshots in the CreateNetworkConfig struct. The framework will proceed to create and render the snapshot available to the peers. An example of a snaphot used in the code is as such:

The last parameter to the CreateNetwork function can be used to alter peers' configuration to use a generated snapshot file (e.g. conf.BlockLayer.Snapshot.File = snaphotInfo.FilePath).

The CommonSnapshotConfigFunc function can be used for the average scenario: it will use the same SnapshotInfo for all peers.

Every node in the test's network has their ports exposed on the host as follows: service_port + 100*n where n is the index of the peer you want to connect to.

For example for peer_replica_2 the following ports are exposed:

Tests can be run defining a DEBUG=1 (e.g. DEBUG=1 ./runTests.sh) environment variable. The main container driving the tests will be run under a Delve Go debugger listening on localhost:50000. The following launch configuration can be used from the VSCode IDE to attach to the debugger and step through the code:

When the tester container gets connected to the test network the debugger will suffer a sudden disconnection: it is a caveat of Docker's way of doing networking. Just attach the debugger again and you are ready to go again.

When the test completes for either a PASS or a FAIL, the underlying test network is destroyed. To prevent this and give you a chance to do your thing you will have to place the breakpoint on the tests.ShutdownNetwork method.

Useful for development is to only execute the test you're currently building. For that matter, simply modify the docker-compose.yml file as follows: