We provide a tool at tools/docker-network with which a local test network can be set up locally with docker. 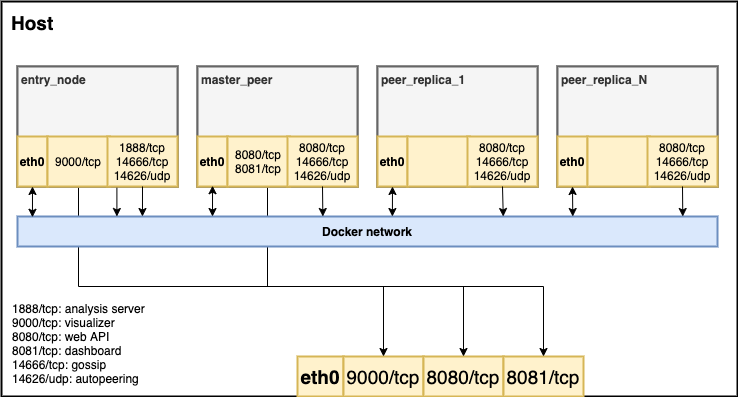 How to Use the Tool​

In the docker network run for example

The command ./run.sh spins up a GoShimmer network within Docker as schematically shown in the figure above. The first integer input defines the number of peer_replicas N. The second argument is optional for activating the Grafana dashboard, where

More details on how to set up the dashboard can be found here.

The peers can communicate freely within the Docker network while the analysis and visualizer dashboard, as well as the peer_master's dashboard and web API are reachable from the host system on the respective ports.

The settings for the different containers (peer_master, peer_replica) can be modified in docker-compose.yml.

How to Use as Development Tool​

Using a standalone throwaway Docker network can be really helpful as a development tool.

Reachable from the host system

It is therefore possible to send blocks to the local network via the peer_master. Log blocks of a specific containter can be followed via

A snapshot tool is provided in the tools folder. The snapshot file that is created must be moved into the integration-tests/assets folder. There, rename and replace the existing bin file (7R1itJx5hVuo9w9hjg5cwKFmek4HMSoBDgJZN8hKGxih.bin). After restarting the docker network the snapshot file will be loaded.

How to Use Block Approval Check Tool​

get_approval_csv.sh script helps you conveniently trigger the block approval checks on all nodes in the docker network, and gather their results in the csv folder.

Once the network is up and running, execute the script:

The exported csv files are timestamped to the date of request.

The Spammer tool lets you add blocks to the tangle when running GoShimmer in a Docker network. In order to start the spammer, you need to send GET requests to a /spammer API endpoint with the following parameters:

When running GoShimmer locally in a Docker network, the network delay is so small that only 1 tip will be available most of the time. In order to artificially create a tangle structure with multiple tips you can add a blockLayer.tangleWidth property to config.docker.json that specifies the number of tips that nodes should retain. This setting exists only for local testing purposes and should not be used in a distributed testnet.

Here is an example config that can be added:

To get an instance up and running on your machine make sure you have Docker Compose installed.

Then you just need to run this command:

Note: Docker will build the GoShimmer image which can take several minutes.

These services that are created by default with docker compose up -d.

A node that is used to expose ports via the host and to have a single attachment point for monitoring tools.

Docker Compose creates a mainnetdb volume to maintain a tangle even after tearing down the containers. Run docker compose down -v to clear the volume.

A node that can be replicated to add more nodes to your local tangle.

These expose 0 ports because they are replicas and the host system cannot map a port to multiple containers.

A node that can dispense tokens.

These services can be added to your deployment through --profile flags and can be configured with ENVIRONMENT_VARIABLES.

A set of containers to enable dashboards and monitoring.

In order to enable these containers you must set the --profile grafana flag when running docker compose.