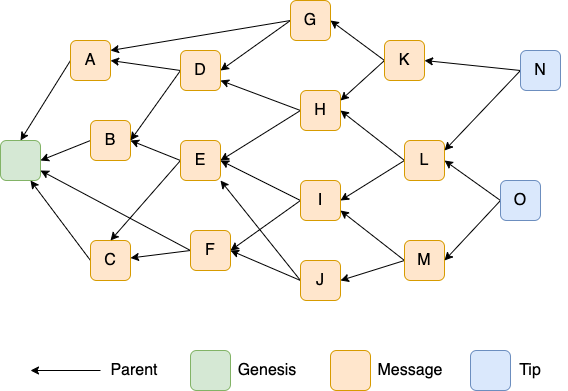 The Tangle represents a growing partially-ordered set of blocks, linked with each other through cryptographic primitives, and replicated to all nodes in the peer-to-peer network. The Tangle enables the ledger state (i.e., the UTXO-DAG formed by transactions contained in blocks), and the possibility to store data.

Blocks are created and signed by nodes. Next to several fields of metadata, they carry a payload. The maximum block size is MAX_MESSAGE_SIZE.

BLAKE2b-256 hash of the byte contents of the block. It should be used by the nodes to index the blocks and by external APIs.

Blocks that do no pass the Syntactical Validation are discarded. Only syntactically valid blocks continue in the data flow, i.e., pass to the Semantic Validation.

A block is syntactically valid if:

Blocks that do not pass the Semantic Validation are discarded. Only semantically valid blocks continue in the data flow.

A block is semantically valid if:

Payloads can recursively contain other payloads, which enables the creation of higher level protocols based on the same concepts of layers, as in traditional software and network architecture.

Payloads other than transactions are always liked with level of knowledge 3.

A node can choose to interpret user-defined payloads by listenting to its specific payload type (possibly via third-party code/software). If a node does not know a certain payload type, it simply treats it as arbitrary data.

The core protocol defines a number of payloads that every node needs to interpret and process in order to participate in the network.

Due to the asynchronicity of the network, we may receive blocks for which their past cone is not known yet. We refer to these blocks as unsolid blocks. It is not possible neither to approve nor to gossip unsolid blocks. The actions required to obtain such missing blocks is called solidification. Solidification is the process of requesting missing referenced blocks. It may be recursively repeated until all of a block's past cone up to the genesis (or snapshot) becomes solid.

In that way, the Tangle enables all nodes to retrieve all of a block's history, even the ones joining the network at a point later in time.

If a block gets solid, it shall walk through the rest of the data flow, then propagate the solid status to its future cone by performing the solidification checks on each of the blocks in its future cone again. 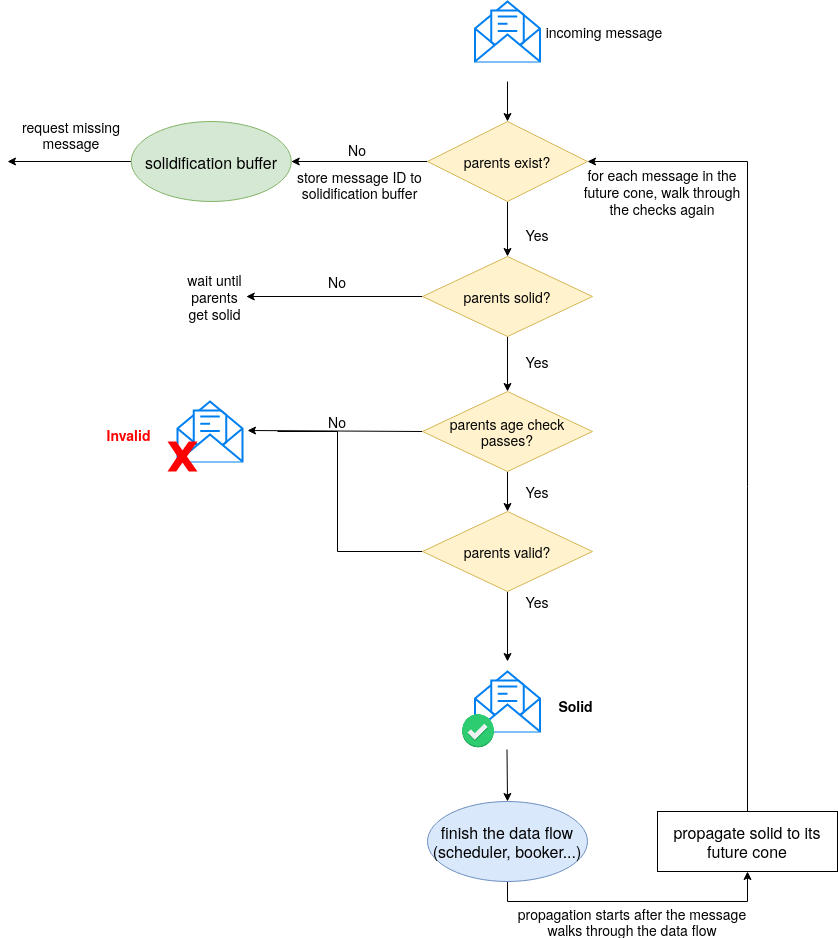 The Tangle builds approval of a given block by directly or indirectly attaching other blocks in its future cone. Due to different reasons, such as the TSA not picking up a given block before its timestamp is still fresh or because its past cone has been rejected, a block can become orphan. This implies that the block cannot be included in the Tangle history since all the recent tips do not contain it in their past cone and thus, it cannot be retrieved during solidification. As a result, it might happen that honest blocks and transactions would need to be reissued or reattached. To overcome this limitation, we propose the approval switch. The idea is to minimize honest blocks along with transactions getting orphaned, by assigning a different meaning to the parents of a block.

Each block can express two levels of approval with respect to its parents:

Block D contains a transaction that has been rejected, thus, due to the monotonicity rule, its future cone must be orphaned. Both blocks F (transaction) and E (data) directly reference D and, traditionally, they should not be considered for tip selection. However, by introducing the approval switch, these blocks can be picked up via a weak reference as blocks G and H show.

When a block is scheduled, it is gossiped to the node's neighbors and, normally, added to the local tip pool except in the following situations:

When selecting tips from the tip pool an additional check is performed to make sure that the timestamp and the past cone of a selected block is valid. For the selected tip, the algorithm needs to find a timestamp of the oldest parent of the oldest unconfirmed block in the past cone of the tip (TS_oum). If the difference between current Confirmed Tangle Time now and the timestamp of the oldest confirmed block is greater than a certain threshold (now - TS_oum > TSC_threshold), then the tip cannot be selected and another one needs to be found. The tip stays in the tip pool until it is automatically removed because of its age.

The Time Since Confirmation check solves the mention problem of false positive schedule by eventually orphaning blocks that were dropped by the network.

The approval weight of a given block takes into account all of its future cone built over all its strong children. Let's consider the following example:

The solidification process does not change, both parent types are used to progress.

Users need to know whether their information will not be orphaned. However, finality is inherently probabilistic. For instance, consider the following scenario: an attacker can trivially maintain a chain of blocks that do not approve any other block. At any given point in time, it is possible that all blocks will be orphaned except this chain. This is incredibly unlikely, but yet still possible.

Therefore, we introduce Approval Weight to measure the finality of any given block. Similarly to Bitcoin's 6 block rule, AW describes how deeply buried a block in the Tangle is. If a block reaches >50% of active consensus mana approving it, i.e., its future cone contains blocks of nodes that together assert >50% of active consensus mana, it as finalized and, thus, confirmed. Specifically, in GoShimmer we use markers to optimize AW calculations and approximate AW instead of tracking it for each block individually.

In order to enable snapshotting based on time constraints rather than special blocks in the Tangle (e.g. checkpoints), nodes need to share the same perception of time. Specifically, they need to have consensus on the age of blocks. This is one of the reasons that blocks must contain a field timestamp which represents the creation time of the block and is signed by the issuing node.

Having consensus on the creation time of blocks enables not only total ordering but also new applications that require certain guarantees regarding time. Specifically, we use block timestamps to enforce timestamps in transactions, which may also be used in computing the Mana associated to a particular node ID.

Nodes need to share a reasonably similar perception of time in order to effectively judge the accuracy of timestamps. Therefore, we propose that nodes synchronize their clock on startup and resynchronize periodically every 30min to counter drift of local clocks. Instead of changing a nodes' system clock, we introduce an offset parameter to adjust for differences between network time and local time of a node. Initially, the Network Time Protocol (NTP) (Go implementation) is used to achieve this task.

The quality of the timestamp is a subjective criterion since it is based on the solidification time of the block. Thus, nodes must use a consensus algorithm, to decide which blocks should be rejected based on subjective criteria. However, currently this feature is not yet implemented in GoShimmer, and we assume all timestamps to be good.

It is problematic when incoming blocks reference extremely old blocks. If any new block may reference any block in the Tangle, then a node will need to keep all blocks readily available, precluding snapshotting. For this reason, we require that the difference between the timestamp of a block, and the timestamp of its parents must be at most 30min. Additionally, we require that timestamps are monotonic, i.e., parents must have a timestamp smaller than their children's timestamps.

Transactions contain a timestamp that is signed by the user when creating the transaction. It is thus different from the timestamp in the block which is created and signed by the node. We require

where TW defines the maximum allowed difference between both timestamps, currently set to 10min.

If a node receives a transaction from a user with an invalid timestamp it does not create a block but discards the transaction with a corresponding error block to the user. To prevent a user's local clock differences causing issues the node should offer an API endpoint to retrieve its SyncedTime according to the network time.

Reattachments of a transaction are possible during the time window TW. Specifically, a transaction may be reattached in a new block as long as the condition block.timestamp-TW >= transaction.timestamp is fulfilled. If for some reason a transaction is not picked up (even after reattachment) and thus being orphaned, the user needs to create a new transaction with a current timestamp.

Every DLT is a clock, or more specifically a network of synchronized clocks. This clock has a natural correspondence with "real time". If the DLT clock differs significantly from local time, then we can conclude that our DLT clock is off from all the other clocks, and thus the node is out of sync.

Tangle time is the timestamp of the last confirmed block. It cannot be attacked without controlling enough mana to accept incorrect timestamps, making it a reliable, attack-resistant quantity.

Typically speaking, CurrentTime - TangleTime is, on average, the approximate confirmation time of blocks. Thus, if this difference is too far off, then we can conclude that we do not know which blocks are confirmed and thus we are out of sync. In this spirit, we are able to define the following function. 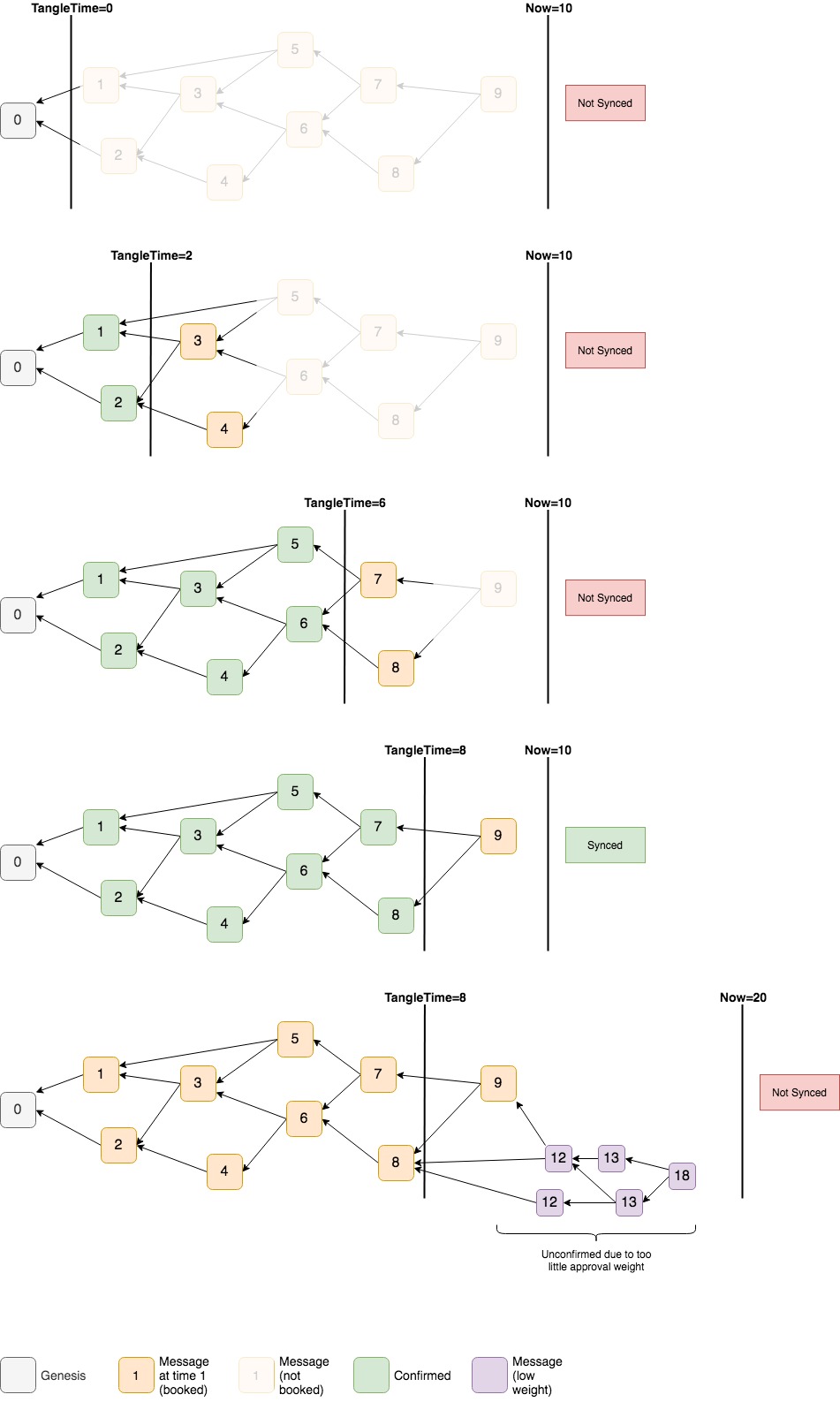