Components of the Protocol

This section provides a high-level description of the interaction between components of the currently implemented GoShimmer protocol. The protocol can be divided into three main elements: a P2P overlay network, an immutable data structure, and a consensus mechanism. We abstract these three elements into layers, where—similarly to other architectures—upper layers build on the functionality provided by the layers below them. The definition of the different layers is merely about the convenience of creating a clear separation of concerns. 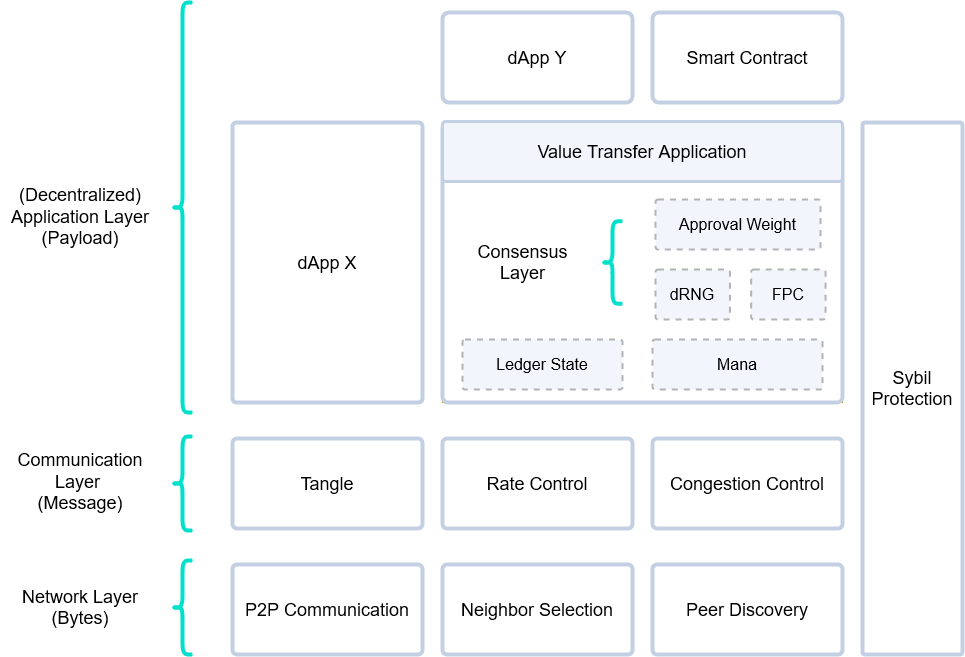 The network is maintained by the network layer modules, which can be characterized as a pure P2P overlay network, meaning that it is a system that runs on top of another network (e.g., the internet), and where all nodes have the same roles and perform the same actions (in contrast to client-server systems). GoShimmer's Network Layer consists of three basic modules: the peer discovery module (which provides a list of nodes actively using the network), and the neighbor selection module (also known as autopeering), which actually selects peers. Finally, the P2P Communication manages a node's neighbors, either selected via autopeering or manual peering.

The communication layer concerns the information propagated through the network layer, which is contained in objects called blocks. This layer forms a DAG with blocks as vertices called the Tangle: a replicated, shared and distributed data structure that emerges—through a combination of deterministic rules, cooperation, and virtual voting. Since nodes have finite capabilities, the number of blocks that the network can process is limited. Thus, the network might become overloaded, either simply because of honest heavy usage or because of malicious (spam) attacks. To protect the network from halting or even from getting inconsistent, the rate control (currently a static PoW) and congestion control modules control when and how many blocks can be gossiped.

The diagram below represents the interaction between the different modules in the protocol (event driven). Each blue box represents a component of the Tangle codebase, which has events (in yellow boxes) that belong to it. Those events will trigger methods (the green boxes), that can also trigger other methods. This triggering is represented by the arrows in the diagram. Finally, the purple boxes represent events that do not belong to the component that triggered them.

As an example, take the Parser component. The function ProcessGossipBlock will trigger the method Parse, which is the only entry to the component. There are three possible outcomes to the Parser: triggering a ParsingFailed event, a BlockRejected event, or a BlockParsed event. In the last case, the event will trigger the StoreBlock method (which is the entry to the Storage component), whereas the first two events do not trigger any other component.

We call this the data flow, i.e., the life cycle of a block, from block reception (meaning that we focus here on the point of view of a node receiving a block issued by another node) up until acceptance in the Tangle. Notice that any block, either created locally by the node or received from a neighbor needs to pass through the data flow.

The IssuePayload function creates a valid payload which is provided to the CreateBlock method, along with a set of parents chosen with the Tip Selection Algorithm. Then, the Block Factory component is responsible to find a nonce compatible with the PoW requirements defined by the rate control module. Finally, the block is signed. Notice that the block generation should follow the rates imposed by the rate setter, as defined in rate setting.

The first step after the arrival of the block to the block inbox is the parsing, which consists of the following different filtering processes (meaning that the blocks that don't pass these steps will not be stored):

Followed by the bytes filters, the received bytes are parsed into a block and its corresponding payload and syntactically validated. From now on, the filters operate on block objects rather than just bytes.

Only blocks that pass the Parser are stored, along with their metadata. Additionally, new blocks are stored as children of their parents, i.e., a reverse mapping that enables us to walk the Tangle into the future cone of a block.

Solidification is the process of requesting missing blocks. In this step, the node checks if all the past cone of the block is known; in the case that the node realizes that a block in the past cone is missing, it sends a request to its neighbors asking for that missing block. This process is recursively repeated until all of a block's past cone up to the genesis (or snapshot) becomes known to the node. This way, the protocol enables any node to retrieve the entire block history, even for nodes that have just joined the network.

The scheduler makes sure that the network as a whole can operate with maximum throughput and minimum delays while providing consistency, fairness (according to aMana), and security. It, therefore, regulates the allowed influx of blocks to the network as a congestion-control mechanism.

After scheduling, the block goes to the booker. This step is different between blocks that contain a transaction payload and blocks that do not contain it.

In the case of a non-transaction payload, booking into the Tangle occurs after the conflicting parents conflicts check, i.e., after checking if the parents' conflicts contain sets of (two or more) transactions that belong to the same conflict set. In the case of this check not being successful, the block is marked as invalid and not booked.

In the case of a transaction as payload, initially, the following check is done:

Finally, after a block is booked, it might become a marker (depending on the marker policy) and can be gossiped.

A detailed description can be found here.