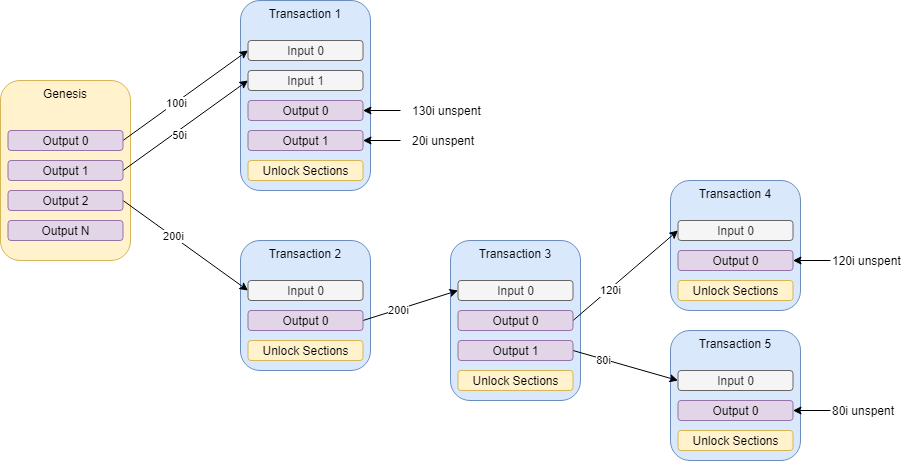 The balance of the tokenized asset.

If a transaction passes the semantic validation, its referenced UTXOs shall be marked as spent and the corresponding new outputs shall be booked/specified in the ledger.

Transactions that do not pass semantic validation shall be discarded. Their UTXOs are not marked as spent and neither are their outputs booked into the ledger. Moreover, their blocks shall be considered invalid.

The introduction of a voting-based consensus requires a fast and easy way to determine a node's initial opinion for every received transaction. This includes the ability to both detect double spends and transactions that try to spend non-existing funds. These conditions are fulfilled by the introduction of an Unspent Transaction Output (UTXO) model for record-keeping, which enables the validation of transactions in real time.

The concept of UTXO style transactions is directly linked to the creation of a directed acyclic graph (DAG), in which the vertices are transactions and the links between these are determined by the outputs and inputs of transactions.

To deal with double spends and leverage on certain properties of UTXO, we introduce the Realities Ledger State.

In the Realities Ledger State, we model the different perceptions of the ledger state that exist in the Tangle. In each “reality” on its own there are zero conflicting transactions. Each reality thus forms an in itself consistent UTXO sub-DAG, where every transaction references any other transaction correctly.

Since outputs of transactions can only be consumed once, a transaction that double spends outputs creates a persistent conflict in a corresponding UTXO DAG. Each conflict receives a unique identifier conflictID. These conflicts cannot be merged by any vertices (transactions). A transaction that attempts to merge incompatible conflicts fails to pass a validity check and is marked as invalid.

The composition of all realities defines the Realities Ledger State.

From this composition nodes are able to know which possible outcomes for the Tangle exist, where they split, how they relate to each other, if they can be merged and which blocks are valid tips. All of this information can be retrieved in a fast and efficient way without having to walk the Tangle.

Ultimately, for a set of competing realities, only one reality can survive. It is then up to the consensus protocol to determine which conflict is part of the eventually accepted reality.

The UTXO DAG models the relationship between transactions, by tracking which outputs have been spent by what transaction. Since outputs can only be spent once, we use this property to detect double spends.

The UTXO model and the concept of solidification, makes all non-conflicting transactions converge to the same ledger state no matter in which order the transactions are received. Blocks containing these transactions could always reference each other in the Tangle without limitations.

However, every double spend creates a new possible version of the ledger state that will no longer converge. Whenever a double spend is detected, see the previous section, we track the outputs created by the conflicting transactions and all of the transactions that spend these outputs, by creating a container for them in the ledger which we call a conflict.

Every conflict shall be identified by the unique identifier conflictID. We consider two kinds of conflicts: conflict conflicts and aggregated conflicts, which are explained in the following sections.

Outputs inside a conflict can be double spent again, recursively forming sub-conflicts.

On solidification of a block, we shall store the corresponding conflict identifier together with every output, as well as the transaction metadata to enable instant lookups of this information. Thus, on solidification, a transaction can be immediately associated with a conflict.

A transaction that does not create a double spend inherits the conflicts of the input's conflicts. In the simplest case, where there is only one input conflict the transaction inherits that conflict.

To calculate the unique identifier of a new aggregated conflict, we take the identifiers of the conflicts that were aggregated, sort them lexicographically and hash the concatenated identifiers once

These properties allow for an efficient reduction of a set of conflicts. In the following we will require the following fields as part of the conflict data:

Since conflicts represent the ledger state associated with a double spend and sub-conflicts implicitly share the perception of their parents, we define an operation to normalize a list of conflicts that gets rid of all conflicts that are referenced by other conflicts in that list. The function returns NULL if the conflicts are conflicting and can not be merged.

Merging of Conflicts Into the Master Conflict​