In order to establish connections, an IOTA node needs to discover and maintain a list of the reachable IP addresses of other peers. Nodes need to be kept up-to-date about the ledger state, thus they exchange information with each other. Each node establishes a communication channel with a small subset of nodes (i.e., neighbors) via a process called peering. Such a process must be resilient against eclipse attacks: if all of a node’s neighbors are controlled by an attacker, then the attacker has complete control over the node’s view of the Tangle. Moreover, to prevent or limit sybil-based attacks, the neighbor selection protocol makes use of a scarce resource dubbed Consensus Mana: arbitrary nodes can be created, but it is difficult to produce high mana nodes.

Throughout this section the terms Node and Peer are used interchangeably to refer to a Node device.

The usage of the Ping and Pong mechanism is to be considered as a bidirectional exchange similarly to how described by other standards such as CoAP and WebSocket.

Every node has a cryptographic identity, a key on the ed25519 elliptic curve. The blake2b hash of the public key of the peer serves as its identifier or node ID.

The main goal of the Peer Discovery protocol is to expose an interface providing a list of all the verified peers. To bootstrap the peer discovery, a node must be able to reach one or more entry nodes. To achieve this, the implementation of the protocol shall provide a hard-coded list of trusted entry nodes run by the IF or by trusted community members that answer to peer discovery packets coming from new nodes joining the IOTA network. This approach is a common practice of many distributed networks [Neudecker 2018]. Public Key-based Cryptography (PKC) shall be used for uniquely identifying peers and for authenticating each packet. The usage of the Ping and Pong protocols is that Ping are sent to verify a given peer and, upon reception of a valid Pong as a response from that peer, the peer is verified. Once a peer has been verified, it can be queried to discover new peers by sending a DiscoveryRequest. As a response, a DiscoveryResponse shall be returned, containing a list of new peers. The new peer nodes in this list shall be verified by the receiving application. 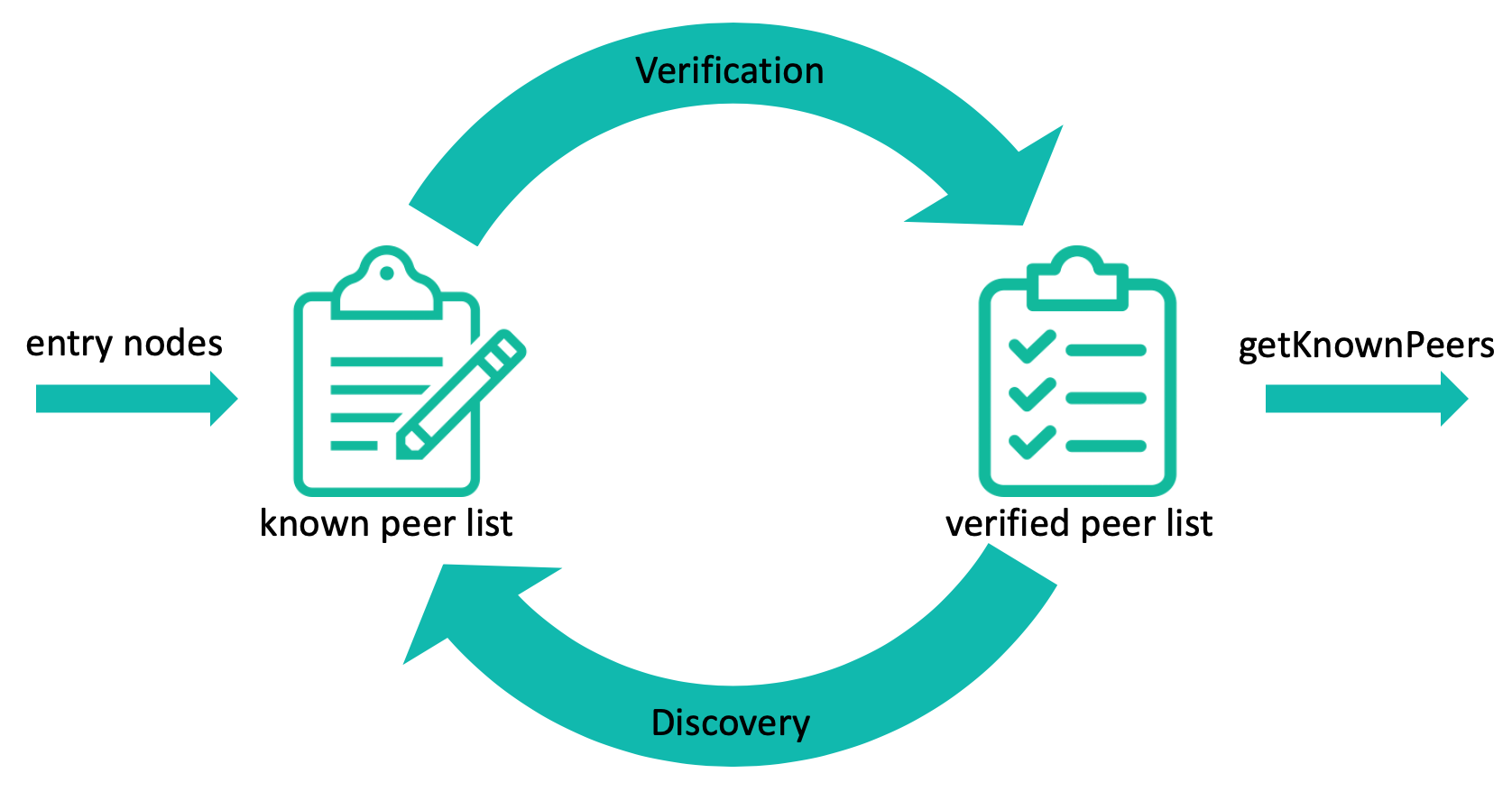 The verification process always initiates from a Ping. Upon reception of a Ping, a peer shall check its validity by:

Upon successful validation of a received Ping, a peer shall respond with a Pong. In case the sender of the Ping is a new peer from the perspective of the receiving node, the receiver peer shall add it to its known_peer_list. This enables the verification process to also occur in the reverse direction.

Upon reception of a Pong, a peer shall check its validity by:

Upon successful validation of a received Pong, a peer shall:

While verifying a new peer, if no or an invalid Pong is received after max_verify_attempts attempts, that node shall be removed from the known_peer_list. Each expected reply should have a timeout such that if no answer is received after that, an attempt is considered concluded and counted as failed.

Each peer entry of the verified_peer_list may be used to discover new peers. This process is initiated by sending a DiscoveryRequest.

Upon reception of a DiscoveryRequest, a peer node shall check its validity by:

Upon successful validation of a received DiscoveryRequest, a peer shall reply with a DiscoveryResponse.

Upon reception of a DiscoveryResponse, a peer shall check its validity by:

Upon successful validation of a received DiscoveryResponse, a node shall add the nodes contained in the peers field to the known_peer_list.

The goal of the neighbor selection is to build a node's neighborhood (to be used by the gossip protocol) while preventing attackers from “tricking” other nodes into becoming neighbors. Neighbors are established when one node sends a peering request to another node, which in turn accepts or rejects the request with a peering response.

To prevent attacks, the protocol makes the peering request verifiably random such that attackers cannot create nodes to which the target node will send requests. At its core, the neighbor selection protocol uses both a screening process called Consensus Mana rank and a score function that takes into account some randomness dubbed private salt and public salt. Half of the neighbors will be constituted from nodes that accepted the peering request, while half will be constituted of nodes that will request for the peering. The two distinct groups of neighbors are consequently called:

Local variables defined here are included to help in understanding the protocol described in this section. The node application shall handle those variables in some form.

Each peer discovered and verified via the Peer Discovery protocol shall have a consensus mana value associated with it. The peer running the Neighbor Selection protocol shall keep this information up-to-date and use it to update a data structure called manaRank containing the list of the nodes' identities for each mana value. The aim of this ranking is to select a subset of peers having similar mana to the node preparing the ranking. More specifically, let's define potentialNeighbors to be such a subset, that is divided into a lower and an upper set with respect to a targetMana value (i.e., the mana value of the node performing the ranking). By iterating over the manaRank, each node shall fill both the lower and upper sets with nodes' identities having a similar rank to itself, not less/greater than a given threshold rho respectively, except when each subset does not reach the minimal size r.

The following pseudocode describes a reference implementation of this process:

The maximum number of neighbors is a parameter of the gossip protocol. This section proposes to use a size of 8 equally divided into 4 chosen (outbound) and 4 accepted (inbound) neighbors. It is crucial to decide on a fixed number of neighbors, as the constant number decreases an eclipse probability exponentially. The chosen k is a compromise between having more connections resulting in lower performance and increased protection from an eclipse attack.

The operations involved during neighbor selection are listed in the following:

The score between two nodes is measured through the score function s, defined by:

Note that the value used as the score is an unsigned integer derived from the first 4 bytes of the byte array after the hash function.

In order to connect to new neighbors, each node with ID ownID and public salt pubSalt keeps a list of potential neighbors derived via Mana rank that is sorted by their score d(ownID, ·, pubSalt). Then, the node shall send peering requests in ascending order, containing its own current public salt and a timestamp representing the issuance time of the request. The connecting node shall repeat this process until it has established connections to enough neighbors or it finds closer peers. Those neighbors make up its list of chosen neighbors. This entire process is also illustrated in the following pseudocode:

More specifically, after sending a peering request a node shall:

Similar to the previous case, in order to accept neighbors, every node with ID ownID shall generate a private salt privSalt.

Upon reception of a Peering Request, a peer shall make a decision to accept, reject or discard the request by: